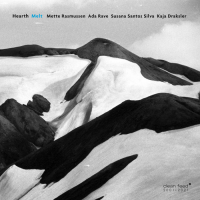 Four of the most exciting young improvisers on the European scene assemble for the first time under the name Hearth. In a cosmopolitan roster overflowing with talents who each possess a distinctive individual voice, Amsterdam-based Argentinean reedplayer Ada Rave joins with the Copenhagen-domiciled Slovenian pianist Kaja Draksler, Stockholm-located Portuguese trumpeter Susana Santos Silva and Trondheim-resident Danish saxophonist Mette Rasmussen. While improv sessions often thrive on no-holds-barred expression, it really is the collective which is the star on Melt.

Recorded in May 2019 at the Portalegre Jazz Festival in Portugal, the six cuts are uncredited, but might easily be mistaken for compositions due to their careful marshalling of texture and timbre and the unity of purpose on display; yet, characteristic of spontaneous invention, they still boast the unpredictability and vivacity beyond any score. Such attributes attest to a willingness to sublimate ego to cooperative endeavor. Extended techniques form a natural part of everyone's armory, even Draksler who belies the tempered nature of the piano through interior manipulations, to match the ear-catching sound worlds conjured by the multiphonics, plosives and preparations of her colleagues.

As the sole chordal input, it is often Draksler's piano which furnishes hints of structure, even though conventional markers of rhythm or melody are sparse. On "In Oscillation," her rippling tremolos buoy up the swell of a triumphal horn chorus, while on "Turbulent Flow" her gentle tolling forms the framework upon which layers of long breathy tones billow and settle. As those descriptions imply, Rave, Rasmussen and Silva often work as a unit, shifting patterns and extemporizing unisons in off-kilter synchronization which manifests itself in diverse ways. Oddly intersecting single notes introduce the opening "Fading Icebergs," while long tones coalesce into a lapping wave part way through "Tidal Phase."

But, inevitably with such accomplished players, there are notable individual episodes, especially on "Diving Bells," the longest and most varied track, which starts with Rave's corkscrewing tenor saxophone distortions, offset by Rasmussen's abrasive alto saxophone blurts. Later in the same piece Draksler's scattered keyboard stikes begin almost as the antithesis of a barnstorming-solo, with simple repetition which only gradually builds momentum and complexity before becoming subsumed in a litany of tinkling percussion, brassy trills, and cartoonish squeaking, with Rasmussen vocalizing through her instrument capping another striking passage.

But just like an elite sports team, Hearth demonstrates that stars deliver even more when aligned with squad goals.