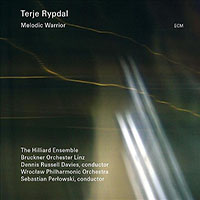 Some albums are worth the wait, even if that wait is a full decade. The lion's share of guitarist Terje Rypdal's Melodic Warrior is devoted to the nine-movement title suite, a 2003 recording with the Bruckner Orchester Linz and, most importantly, the Hilliard Ensemble, the vocal ensemble that leapt to greater fame with Officium (ECM, 1993), the first of three recordings with Rypdal's fellow countryman, Norwegian saxophonist Jan Garbarek. The four-movement "And the Sky was Coloured with Waterfalls and Angels," from a 2009 performance with the Wroclaw Philharmonic Orchestra at Poland's renowned Jazztopad Festival, rounds out the record, a series of tone poem studies in contrast.

In a career documented exclusively on ECM since Terje Rypdal (1971), the guitarist has divided his time between improv-heavy (but still structure-based) concerns like 1975's Odyssey—reissued, finally in its entirety, in the 2012 Odyssey: In Studio & In Concert box—and an interest in classical composition that began with Rypdal's introduction to the music of György Ligeti, through the soundtrack to Stanley Kubrick's 2001: A Space Odyssey (1968). Best-known, perhaps, for "jazz" recordings more predicated on an instantly recognizable tone and approach to electric guitar, Rypdal's reputation as a classical composer remains of no small significance—and despite working as a composer alone on recordings like 1990's Undisonus, Rypdal has also found ways to integrate his soaring six strings into the mix.

Those expecting a guitar-based version of the Hilliards' more intimate Garbarek collaborations will be surprised, but they should not be disappointed. Rypdal has delivered a 45-minute suite that employs the Hilliards to traverse considerable territory, from the brooding introductory "Awakening," which moves from near-silent stasis and slowly intensifying symphonics to the vocal ensemble's first appearance, enticing the audience to "listen to this song of life," even as its soaring consonant harmonies dissolve into a swirling dissonant descent that leads to "Easy Now," where Rypdal's overdriven guitar sings above a horn ensemble that gradually unfolds into a fuller orchestral backdrop.

While the suite's title suggests—and delivers upon—Rypdal's intrinsically bold lyricism, it also capitalizes on left-of-center concerns, as "The Secret File" juxtaposes haunting beauty with Ligetian extremes. Rypdal is the lead thematic instrument over propulsive strings on the aptly titled "My Music Reaches to the Sky" but only before dispersing into more unfettered territory. The suite ends beautifully (and anti-climactically), the Hilliards' final statement leading to a soft but sweeping symphonic conclusion, as Rypdal's gradually ascending notes fade to silence.

"And the Sky was Coloured with Waterfalls and Angels" is similarly modern, mixing close-voiced horns and shuffling percussion with swirling strings, thundering tympanis and searing guitar, in addition to contrasting brooding stases with angular themes and low register brass and woodwinds.

As fundamental as the Hilliard Ensemble is to the "Melodic Warrior" suite, and as clear as Rypdal's compositional roots are, it's ultimately his own guitar work that gives the recording its specificity. Combined with more recent works like The Sound of Dreams—premiered at the 2013 Molde International Jazz Festival)—Melodic Warrior demonstrates that what was once a clear dividing line between Rypdal's two concerns has become something much fuzzier...and is all the better for it.