By Glenn Astarita
February 4, 2012
Sign in to view read count 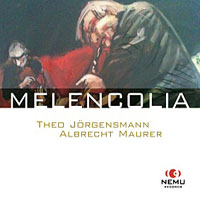 Melencolia is based on Abrecht Dürer's 1514 engraving by the same name, created during Germany's horrific Peasants' Wars. However, these prominent jazz and avant-garde artists unite the brighter side of life to offset some fierce interactions.

The lower register of Theo Jorgensmann's G-low clarinet synchronizes with Theo Jorgensmann & Albrecht Maurer - Duo Melencolia's violin and viola phrasings, bringing the duo closer from a timbral perspective. As such, the music emerges from a similar plane and intimates a tighter soundscape with a narrowed gap between higher and lower registers.

With subtle harmonies and chirpy spikes in the action all tinted with classical overtones, Jörgensmann and Maurer craft a sprawling musical plane amid their synergistic output. As they mimic dour circumstances or transmit a laidback disposition, their framework is balanced. At times they chase the demons away or operate within undulating currents and mystifying passages. On "Part 5," Maurer imparts a touch of European folk, morphing free-jazz aspects into a maniacal chain of events, while Jörgensmann's dainty hues, circular phrasings, and linear lines are occasionally leveled with a sanctifying line of fire.

The program is defined on semi-structured song forms and a harmonious incorporation of abstruse tangents, friendly mayhem, and a mechanical mode of destruction outlined on "Melencolia Epilog." The superfluous movements or free-form burnouts do not mar the close-knit engagement. The artists align the best of many musical worlds and cast a distinct identity throughout the ebbs and flows, abetted by their sprightly artistic acumen, superior musicianship, and pioneering vision.