By Doug Collette
March 9, 2019
Sign in to view read count 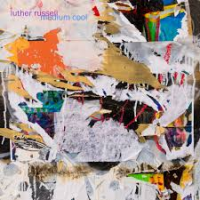 The photo of Luther Russell wearing shades inside this digipak perfectly captures the attitude of this album's title, albeit with slightly self-effacing charm. But the music resounds even deeper in that regard. Russell's longstanding independence is the source of the infectious immediacy in his rock, and his do-it-yourself approach to making records creates loose, scrappy power pop that channels Rolling Stones 99 in the same way that Matthew Sweet's heavier and more formally constructed music echoes The Beatles.

Comprehensively documented on the anthology Selective Memories (Hanky Panky, 2018), the virtue of "almost but not quite sloppy" blooms to full flower on Medium Cool, Russell's latest solo project in a career that has included collaborations with the disparate likes of Marc Ford of the Black Crowes, The Magpie Salute), Jakob Dylan from The Wallflowers, and Jody Stephens from Big Star. No comparably high-profile personages worked on this album, but the names are familiar to those intimate with Luther's past work (including Those Pretty Wrongs). Besides, the end result matters more than the associations, as evidenced on "The Sound of Rock and Roll" (which, in an act of artistic continuity, closed the aforementioned compilation).

The connection extends to the lush acoustic guitars on that latter cut, evidence of how co-producer and bassist Jason Hiller captured just enough sonic fidelity recording these roughly thirty-five minutes: the audio quality is clean, yet not antiseptic. Meanwhile, drummer Derek Brown swings on "Can't Be Sad" and Danny de la Matyr adds layers of harmony vocals that simultaneously accentuate the melody and smooth the rough-hewn edges of a track best heard at high volume. In contrast to the late-lamented Big Star and its Anglo-derived work, there's a natural ease to Russell's compositions, playing, and studio expertise (as enclosed in the varied cover artwork).

Like the best of Russell's work, Medium Cool is completely bereft of self-consciousness, even when the songwriter uses tried and true automobile imagery on a tune titled "Corvette Summer." Luther isn't worried about getting things right but preserving the inner drive of a given tune, as he does with his raw guitar solo. In that respect, this album is worth comparing favorably to the latest album by power popster peer Paul Collins Jazz Out of My Head (Alive NaturalSound, 2018), as well as the more highly-polished work of the late, great Tommy Keene, whose music radiates a similar spontaneity.

Like that former one-time member of The Nerves (with Americana master and Plimsouls linchpin Peter Case), Luther Russell brings the details of inner reflection to his performances even as he rocks. "At Your Feet" is more forlorn than it is abandoned, but its emotional quotient is no less authentic than that psychological angle permeating the chiming electric guitar chord progression and echoed vocals of "Have You Heard?" "Sad Lady" is similarly populated with discerning observations, its quasi-rockabilly introduction proceeding directly from the preceding track, one more demonstration of what Russell's taught himself about making records over the years.

Russell's oeuvre is nothing if not of a piece, and the comparatively short period of time in which Medium Cool was created and committed to tape no doubt accounts for its own seamless quality and pervasive mood. Yet this bonafide rocker is not as interested in nostalgia on songs like "Talkin' to Myself." Instead, this California kid (sic) is expending concerted effort to make sense of the present by viewing it through the prism of the past. The end result presents him with a means for eternal youth to move moving forward into the future with the same confidence that pervades this long-player.

Deep Feelings; Can't Be Sad; The Sound of Rock and Roll; Corvette Summer; At Your Feet; Have You Heard; Sad Lady; Talking to Myself; Blue Balloon; Can't Turn Away.