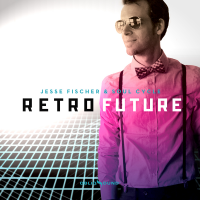 I recognized Fischer's name from about a year ago when he submitted a track from his last album to the AAJ dotd. As I listened to the track, I remember thinking, "This isn't my thing." And then I listened to it again. And again. It's still not my thing, but there's no mistaking the catchy groove Fisher develops, and how it gets tough to step away from his tune, whether it's your "thing" or not. Good stuff.