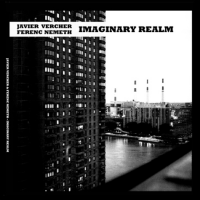 An ode to some big stones. Vim, veracity and velocity. Great sax playing and the band dynamic is fresh. Supremely moving.

Imaginary Realm, Vercher's second collaboration with drummer Ferenc Nemeth, is as aptly titled as his previous disc. This time the journey it describes is an internal one – states of mind, not points on a map.

Vercher and Nemeth took as their starting point the tantalizing mystery of Stonehenge, envisioning some otherworldly force leaving it´s mark on the earth. Beauty emerges from near chaos. With special guest pianist David Kikoski.