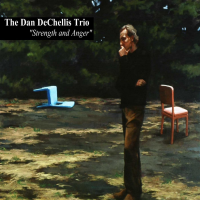 24 Hour Intervals; Anticipation; 20 Year Waltz; Empty Words And Spent Energy; Shoulders Of Giants; The First Of Many; Full Circle; The Decision; Thing Too Much; My Old Man; On The Brink; The Helpless Romantic; SKIRMISH; Morning Due; I Know What You're Thinking; What I Know, And What I Wish I Didn't; Strength And Anger.