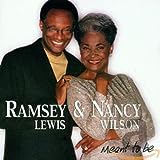 The careers of singer Nancy Wilson and pianist Ramsey Lewis have followed parallel lines since the early 1960s. Although both began as jazz artists, they soon found greater fame and fortune in contemporary pop and have rarely looked back since. In 1982, Mr. Lewis and Ms. Wilson teamed up for a vapid, forgettable collection of smooth jazz/contemporary pop called The Two of Us. For jazz fans, the record represented all the wrong turns taken by these two obviously talented musicians.

Twenty years later Ms. Wilson and Mr. Lewis have both reunited and returned to their acoustic jazz roots with Meant to Be. The split between the five vocals and six instrumentals recalls the format of Ms. Wilson’s famous early jazz albums, The Swingin’s Mutual with George Shearing (1960) and Nancy Wilson and Cannonball Adderley (1962). Forty years later, Ms. Wilson’s rich, charismatic alto remains in remarkable shape even if her singing has not grown noticeably more inventive.

The instrumentals are mostly original compositions with “Truthfully” being the stand out tune. Mr. Lewis has a heavy touch on the keyboard, and his declamatory style often distracts from his otherwise accomplished playing. The most impressive voice on the instrumental tracks actually belongs to bassist Larry Gray whose playing is subtle and imaginative.

Ms. Wilson, naturally, holds center stage on the vocal tracks. Never one to underplay a lyric, her reading of Dave Frishberg’s “Peel Me a Grape” is filled with verbal winks and nudges. If her approach ends up stepping on some of the tune’s wit, it is hard not to enjoy listening to Ms. Wilson sink her teeth into a good song. She delivers “Did I Ever Really Live?”, a tune Joe Williams used to sing, with the kind of high drama that has always been her calling card. “First Time Love,” a Dave Grusin/Patti Austin tune, is very reminiscent of the kind of interchangeable middle of the road songs Ms. Wilson has spent the last fifteen years or so singing. On the other hand, Brenda Russell’s “Piano in the Dark” is a superior contemporary pop song. Unfortunately, the tune staggers under the weight of Ms. Wilson’s interpretation. Van Morrison’s “Moondance” proves to be a much more suitable and inspired choice.

Peel Me a Grape, Truthfully, Did I Ever Really Live?, Velvet Night, A Moment Alone, Moondance, Meant to Be, Piano in the Dark, Time Peace, First Time Love, Tanquissimo