BY JOHN EYLES
June 9, 2005
Sign in to view read count
May was a month of celebration across the capital, largely because of success on the football field. But there were also some notable musical highlights. Here is a précis of the month.

Freedom of the City Festival

For financial reasons, this year's festival was reduced to only one day and moved from its perennial venue, Conway Hall. Nonetheless, it was an excellent day. It deliberately featured groupings that had never played together before (with the exception of the London Improvisers Orchestra, who closed proceedings), with the focus on duos and trios, giving an added frisson of expectation to each performance.
In a day without a dull moment, to select highlights seems churlish; nearly every grouping was fresh, exciting and revelatory. Nonetheless, my personal favourites were Alan Wilkinson, Phil Durrant & Mark Sanders, and Paul Rutherford, John Edwards & Mark Sanders (again!). Durrant's multi-layering (via his laptop) of Wilkinson built up a disorienting, kaleidoscopic effect that offset the brutal power of Wilkinson's playing. Rutherford is so often featured entirely unaccompanied that to hear him with bass and drums (and what bass and drums!) added to the depth and breadth of the whole.

As is so often the case after Freedom of the City, I eagerly await the release of the CD version of these performances next year (?), in order to relive and validate my own reactions to them.

Across town, at the Royal Albert Hall, Cream were performing together for the first time in twelve years, and the first time in the UK since their farewell gig at the same venue in 1968. Famously, Ginger Baker said of Cream, "We used Eric Clapton as the Ornette Coleman figure... but no-one told Eric.

Meanwhile, at the Barbican, we had the real thing! Ornette was celebrating his 75th birthday with a concert featuring son Denardo on drums plus the twin double basses of Greg Cohen and Tony Falanga.
As he made his way onto the stage, Ornette walked as if he were feeling the effect of his years, but as soon as he blew, the years fell away and he played as beautifully as ever, with that sweet, mournful tone, which surely affects anyone who hears it. His fingers and brain were in as good a condition as his lungs and pipes; ideas tumbled out of him, incisive and perfectly articulated. The two basses were a masterstroke; Cohen plucked; Falanga bowed; both as much lead instruments as Ornette.

Over the years, London has enjoyed some very memorable gigs from Ornette - Prime Time at the Town & Country Club, a chaotic multi-media Prime Time show and the Quartet with Don Cherry, both at the Royal Festival Hall, the Naked Lunch soundtrack performed live at the Barbican; this performance was the equal of any of them. No, in fact it was the best Ornette show I can remember. A triumph.

After beating neighbours Charlton, Chelsea were presented with the Premiership trophy (which they had won the previous week, for the first time) and in the following weeks went on to beat many Premiership records. Cue dancing on the streets of west London.

To celebrate VE Day, this special concert featured Shostakovich's son Maxim conducting his father's great war symphony. Its accompanying cinemaphonia presentation of footage from the Nazi invasion of the Soviet Union including the siege of Leningrad provided a powerful anti-war message.

Every once in a while, there is an evening when there are just too many essential things to do, leading to inevitable frustration. This was a classic example! Not only was John Tchicai playing in London for the first time in decades, it was also the grand opening night of the new Vortex, now re-located from Stoke Newington to the new Dalston Culture House. To cap it all, The Necks were playing the only London date of their European tour at Spitz. Grrr!

I opted to see (the legendary) Tchicai, who was in London to record with Evan Parker and Spring Heel Jack. He played here with Evan Parker, John Coxon, Ashley Wales, John Edwards, Mark Sanders and Tony Marsh - definitely the A-team! This was that rarest of events, a sold-out improv gig; an hour before start time, the "House Full signs were up, and by the time the musicians took to the stage the air-conditioning was struggling to keep the temperature down. Although he was the reason for the sell-out, Tchicai certainly did not hog the limelight. He was renewing an acquaintance with Parker dating back twenty years (or more?) and the first half of the show was stolen by a long improvised duet between them. Tchicai fitted effortlessly into this typical London improv setting. One can only hope that he returns soon for further explorations.

The night after its grand opening, I went to check out the new Vortex premises. Although only located about a mile south of Stoke Newington, Dalston has a very different vibe. The Dalston Culture House is part of a larger programme to regenerate the area.
Thanks largely to its indefatigable proprietor David Mossman, the new Vortex has successfully transferred much of the atmosphere and ambience of the old club. The new space is a similar size to the old, but rather better laid out, with the bar and toilets at the back rather than alongside the stage, leading to less disturbance. Although it has installed all of the legally essential facilities (very important, as it was the lack of these that led to the license being refused on the old club), so far the budget has not stretched to such luxuries as a raised stage, a means of playing recorded music before the show & in the interval, or acoustic curtains for the large picture window. As ever with The Vortex, all offers of help - financial or in kind - will be gratefully received. You can even buy lifetime membership for £1000, surely a bargain!

As for the music, Claude Deppa's Five Funky Fellas lived up to their name, with the ubiquitous tuba player Oren Marshall (in this context a.k.a. Dr. Funk) being the funkiest of the five. (More on Oren Marshall soon in London Calling, as he has just released an excellent album.)

After a tedious goalless match, Arsenal beat Manchester United on penalties to win the FA Cup for the third time in four years. Cue dancing on the streets of north London.

In an amazing match, Liverpool come back from three-nil down to beat AC Milan on penalties and win the Champions League for the fifth time, giving them the right to keep the trophy. Cue dancing on the streets of Merseyside.

West Ham United won the play-off final against Preston, to be promoted back to the Premiership after two years away. Cue dancing on the streets of east London. 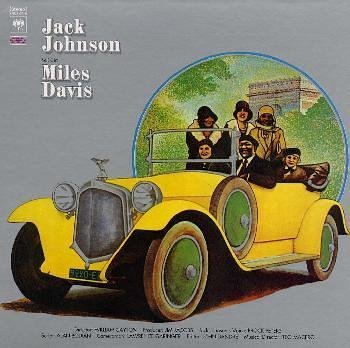 A rare screening of Jack Johnson by William Cayton, a film which is far more famous for its soundtrack than for the actual film. Consisting exclusively of archive footage of Johnson, particularly his fights, it relates his amazing life, complete with walk-on parts for Rasputin, Pancho Villa and King George V. The live soundtrack was provided by Jack DeJohnette, Byron Wallen, Jason Yarde, David Okumu and Neville Malcolm. Based on Miles's original soundtrack - and certainly in keeping with its fiery spirit - their music crackled with electricity and aggression. Wallen, in particular, as the trumpeter, summoned up the feel of Miles, spitting out volleys of staccato phrases; true to the memory both of Miles and of Jack Johnson.