Charles Lloyd & The Marvels with Lucinda Williams: Masters Of War

By Dan Bilawsky
January 29, 2017
Sign in to view read count
Track review of "Masters Of War" 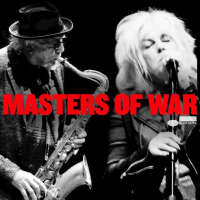 More than half a century has come and gone since Bob Dylan penned "Masters of War," yet the song's message remains as relevant as ever. On January 20, 2017—the very day that Donald Trump took the Oath of Office and became the 45th President of the United States of America—saxophonist Charles Lloyd joined a rapidly growing chorus of dissent:

Nations have been throwing rocks at each other for thousands of years. We go through spells of light and darkness. In my lifetime I have witnessed periods of peace, protest, and uprising, only to be repeated by peace, protest and more uprising. The fact that Bob Dylan's "Masters of War" was written in the early 1960s and not during the last decade, makes it timeless and timely. It breaks my heart to think that there are current generations of young people all over the world who are growing up without knowing of peace in their lives. The words Dylan wrote are a laser beam on humanity. This line, in particular, has stuck with me for over five decades:

The world is a dog's curly tail—no matter how many times we straighten it out, it keeps curling back. As artists we aspire to console, uplift and inspire. To unite us through sound across boundaries and borders and dissolve lines of demarcation that separate. The beautiful thing is that as human beings, even under the most adverse conditions, we are capable of kindness, compassion and love. Vision and hope. All life is one. Who knows, maybe one day we'll succeed. We go forward.

Those well-chosen words from Lloyd accompanied the release of a rendition of the aforementioned Dylan classic, recorded live at Santa Barbara's Lobero Theatre on November 28, 2016. It serves as an impactful piece of protest music, with modern folk rock icon Lucinda Williams fronting the band with her controlled yet impassioned delivery of the lyrics. Lloyd's horn spirals through the air with intensity, Bill Frisell's guitar and Greg Leisz's pedal steel guitar irradiate the meaning of the song with their ominous tidings, and the rhythm combination of drummer Eric Harland and bassist Ruben Rogers serves as ballast in more ways than one. It's a stormy and purposeful performance that deserves to be spread far and wide. Charles Lloyd's saxophone and Lucinda Williams' voice are blowin' in the wind, so listen closely to what they say.