By John Eyles
November 6, 2020
Sign in to view read count
Guitarist Mary Halvorson enrolled to study Biology at Wesleyan University, but she soon dropped the subject after sitting in on one of saxophonist Anthony Braxton's music classes there, instead studying jazz. By November 2004, shortly after her twenty-fourth birthday, Halvorson played guitar at the Royal Festival Hall, London, as a member of Braxton's quintet, the first of many appearances with the saxophonist. In addition, Halvorson played with or—from 2008—led a burgeoning number of groups, often including other Braxton alumni such as violist Jessica Pavone, trumpeter Taylor Ho Bynum or drummer/vibraphonist Tomas Fujiwara. Her guitar-playing displayed the influence of various musical genres as well as her ability to freely improvise. Along the way, she became a regular winner of Best Guitar in the Downbeat International Critics' Poll. The two albums below, both recorded in late 2019, were released in time to be part of the celebrations of Halvorson's fortieth birthday on October 16th 2020... 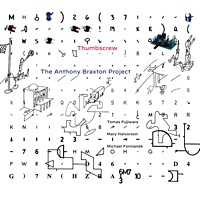 The trio of Halvorson, Fujiwara and double bassist Michael Formanek first came together playing in Ho Bynum's group in 2011; they soon knew they had to form a trio together. From the start, it was a three-composer trio, each member writing music just for the group. The trio's first album was Thumbscrew (Cuneiform, 2014) and the group soon became known by that title.

As well as for Halvorson, 2020 brought a significant milestone for Braxton, his 75th birthday, on June 4th. Doubtless, this was one reason why Thumbscrew's fifth album entirely comprised Braxton compositions. The three members were given access to the Tri-Centric Foundation's Braxton archive, from which they selected compositions which fitted the group's instrumentation and were rarely, if ever, played. According to Halvorson, their choices included graphic scores, complex notated pieces, and everything in between. Having selected nine pieces, Thumbscrew then developed, studio-recorded and premiered the music during an artist residency at City of Asylum, Pittsburgh.

As most of the chosen compositions had not been recorded by Braxton—certainly none with this instrumentation—there are no 'authorised versions' with which Thumbscrew's can be compared. The majority of these versions open with a theme, most often played on guitar, before the trio improvise on it together. For the first time with Thumbscrew, Fujiwara makes occasional use of vibes, adding variety to the group's soundscape. Especially fascinating are three solo versions of "Composition No. 14," featuring guitar, drums and bass soloing alone. All of the tracks show the benefit of the trio's time spent at City of Asylum, as each player knows every piece inside out and can fluently and confidently improvise on it with the others. As a whole, the album is a credit to all three trio members and to Braxton himself. 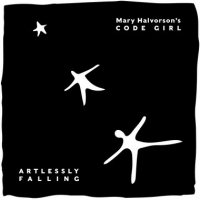 Recorded in December 2016, Code Girl (Firehouse 12, 2018) presented a different facet of Halvorson's music to that heard on the Thumbscrew albums, despite the group Code Girl consisting of the three Thumbscrew members plus Amirtha Kidambi's voice and Ambrose Akinmusire's trumpet. Instead of pieces written by the three trio members as a basis for improvisation, the music on Code Girl consisted entirely of songs—music plus lyrics—written by the guitarist. Exactly the same is true of Code Girl's second album, Artlessly Falling, on which Adam O'Farrill replaces Akinmusire on trumpet, Maria Grand joins on tenor saxophone and voice, and—remarkably—the legendary Robert Wyatt (yes, that one!) sings on three tracks, which Halvorson wrote especially for him. Crucially, Wyatt is not just a bolt-on guest star; as Halvorson says, "Robert is one of my heroes...his music has been an enormous influence on Code Girl, and just about everything I've done...I was floored by the grace and brilliance with which he approached this music. It was a dream come true."

Apparently, the name Code Girl refers to a remark Braxton used in conversation with Halvorson while on a European tour. She settled on the phrase as an album title, because "at that point I'd written a lot of the lyrics... and they seemed a little bit coded and strange." While Halvorson's lyrics could be described as "coded and strange," "poetic and abstract" feels nearer the mark, particularly when they are sung by Wyatt, Kidambi and Major. Halvorson's lyrics are written in a range of poetic forms—double tanka, pantoum, villanelle, ghazal, haibun, free verse, sestina—giving them variety. Overall, the compositions strike a very good balance between words and music, allowing plenty of time and space for the instrumentalists to demonstrate what they are capable of, whether soloing or supplying accompaniment and coloration. O'Farrill's trumpet repeatedly attracts attention, as does Halvorson's guitar, of course. Don't be surprised to see Artlessly Falling all over those "best of 2020" lists.

As she entered her forties, the future looked very bright indeed for Halvorson...