By AAJ STAFF
February 10, 2008
Sign in to view read count
By Michael Hittman

It's probably known that since his last recorded gig, Gemini (play Sun Ra Live in Concert) on Birth Records, a 1993 duo with Gunter Hampel in West Germany), serious illnesses—diabetes that led to the loss of a leg followed by additional surgery for a brain tumor—has confined Marion Brown to a nursing facility in Florida. But other things about this arguably underrated alto saxophonist—who played on Coltrane's incomparable Ascension and was an important figure during the New York Loft Scene and the free jazz movement in Europe—might not be so well known. That, for example, this grandson of an escaped slave from Georgia's Sea Islands, a Gullah from the African Congo, who in turn was raised on the outskirts of Atlanta achieved various academic distinctions: graduation as music major—and frat man—from Clark College; attendance at Howard University law school and a Master's Degree in Ethnomusicology at Wesleyan, where he subsequently taught, as well as at the equally prestigious Brown University, what was then called "Afro-American Studies."

And more: Brown studied and recorded on classical guitar; was a painter who has even sold his works; wrote a set of memoirs (entitled Recollections) and was featured in a French film directed by Marcel Camus (for which he recorded the soundtrack with his late '60s sextet with Gunter Hampel, Ambrose Jackson, Barre Phillips, Steve McCall and Alain Corneau).

Other sorts of roots-revealing information frame a backdrop for, despite hard times, a promised return. After his earliest gig—in an R&B band (Lord Terry & His Star Dust)—Brown's musical encounters are a veritable history of America's classical music: from formal training under Wayman A. Carver (whom he reports "taught me at Clark, played alto in Chick Webb's band and took the first flute solo on record!") to a meeting with Johnny Hodges, who magically Brown relates, "reached inside his pocket and gave me a box of reeds and said—'Young man, you've got the most beautiful tone I ever heard!'"

His encounters with such seminal figures continued with Ornette Coleman, who went inside his bedroom and came back with his white horn when Brown told him he didn't have a horn to play; Archie Shepp, with whom Brown recorded Three For Shepp (Impulse, 1966) and admits, "If it wasn't for him, I'd never be a recording artist" and Sun Ra, in whose Arkestra Brown played when it was housed on 2nd Avenue & E. 3rd Street and who "called (me) aside and told me not to play like Charlie Parker."

But any discussion of Brown's musical journeys also necessitates geographic parameters: a move to Harlem from the South with his mother as a teenager; his return to NYC after military service in a band that was stationed in Japan; 12 years spent in Europe as an expatriate; another return to America with settlement in New Haven with his wife and son, before of course returning to the South, a move, alas, associated with his current medical predicament. 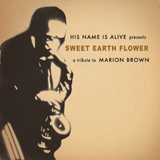 One can only smile at this foot of that ladder of let's call it the spiritual bar originally raised high by Ornette and Albert Ayler in the '60s in the recently released tribute to Brown by His Name Is Alive (Sweet Earth Flower, High Two), selected as one of 2007's Best Tribute Releases by this publication, as Brown himself extended those rungs. With its rock inspired vibe, the mode-like, unwavering dirge-like meditative mood sustained throughout the eight tracks by the players of this remarkable ensemble performance of Brown's compositions unapologetically impacted this listener with a Spoonerism: mood + modal = moodal music.

Yet since Brown remains hopeful about returning to the musical scene, so, too, then must we. A chanting Buddhist ("You know who converted me? Buster Williams!"), Brown's promised return came with these words: "They know me here... I practice in my room... And might even write a symphony."

Reflecting both about his contribution to free jazz, as well as its place in musical history, after crediting the poet Amiri Baraka ("A beautiful cat!") and writers AB Spellman ("and he can write!") and Frank Kofsky ("He was intelligent and very deep and concerned about jazz music") with intellectual growth, Brown offers these thoughts: "People make names to sell their product... I can play any form. Even Western classical music ...I just held on until they caught up! I'm just a music freak and a music lover."

Listen to Michael Hittman's interview on his "In The Pocket" with Marion Brown on 88.3 FM W-LIU February 11th at 7 pm. Visit wliu.org for more information.