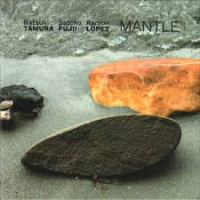 Japanese pianist Satoko Fujii rarely stands still. When she and Spanish drummer Ramon Lopez toured Japan in 2019 on the back of their duo album Confluence (Libra, 2019), they took the opportunity to add Fujii's partner trumpeter Natsuki Tamura to the line up. To make things fresher still, they set themselves a challenge: to each write a new piece for the trio every day. Mantle, recorded in the studio the day after the tour concluded, collects their favorite numbers, three from each principal.

Consequently, while the program has been road-tested to a degree, it retains an appealing rawness, shunning tight arrangements or complex lines. And as a result, while the outcome is similarly enthralling, it is very different to other entries in Fujii's discography made with the same instrumentation, such as the superb 1538 (Libra, 2018).

Many of the themes come hidden within group interplay, cloaked by discursive asides and suspenseful pauses. As such, any authorial differences are masked. Whether on the percussive "From Spring To Summer," the conversational "Straw Coat," or "Came, Left," with its allusions to drum and bugle corps, the three master improvisers hint at rhythm and melody while revelling in dynamic switchbacks and expressive textures.

And those textures go beyond the now expected delights of the weird and wonderful sounds Tamura extracts from his trumpet or Fujii's edgy excursions under the bonnet of her instrument. Lopez' study of tablas manifests in certain patterns and tempered sonorities that he draws from his drum heads, notably in his unaccompanied introduction to "Encounter."

The final "The Temple Bell" toggles between adventurous piano and trumpet exchanges, and drum interludes which touch on moods from martial to bombastic, eventually ramping up to an intense climax and an ultimately enigmatic and unresolved finish. It is an ending which sums up the entire date: loosely handled scripts, embellished by breathtaking improvisation, which still leave plenty for the imagination to ponder.