By Mark Sullivan
November 24, 2016
Sign in to view read count 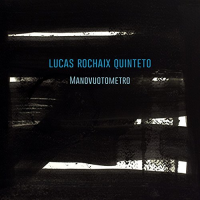 Argentinian guitarist Lucas Rochaix leads a quintet through his strong  debut recording on  Manovuotometro.  Rochaix composed the entire program, making an impression as both composer and performer. He favors a clean jazz guitar tone—reminiscent of someone like Peter Bernstein—but his music is more about making complete compositional statements than showcasing his guitar playing. His quintet is completed by saxophonist Andrés Tarditti, pianist Francisco Sokolowicz, contrabassist Ivana Traboulsi, and drummer Mauricio Cardona. They are all team players, and Rochaix's arrangements give everyone space to shine.

"Tren Y Caminata" is an upbeat opener, the head doubled by guitar and sax. The first indication that this might be a guitar-led session comes with the dramatic contrast of the atmospheric bridge, initially a guitar feature. But even here the solo guitar eventually gives way to a lyrical piano solo, before shifting gears back into the spirited head. "En Bici" is a moderate waltz with a long line, and then the feel changes again for the gentle swing of "El Río Ya Está Creciendo." This tune features a drum introduction, Tarditti's soprano saxophone, and a Latin interlude for bass and drums in duet.

As the subtitle suggests, "Los Anónimos (Diálogo Extraído del Film "Le Havre" de Aki Kaurismaki)" was strongly inspired by the film "Le Havre" by Finnish director Aki Kaurismaki. French dialog from the soundtrack opens the piece; Rochaix says he uses a loop of it for his live performances as well. A doleful theme comes in as the voices fade out, and it runs through the whole performance as a unifying element. It does have a cinematic feel, even for someone who has not seen the film. "M.B." is the ballad of the set, including a long, lyrical bass solo from Traboulsi.

Manovuotometro is a fine, varied collection of contemporary jazz tunes, with an assurance rare in a debut recording. I look forward to hearing what Rochaix does next.