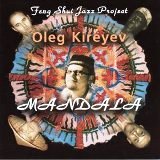 Saxophonist Oleg Kireyev's Mandala is a most interesting release. At a mere three minutes and thirty-six seconds, the title track alone is an audible sonic feast with everything from thrash rock guitar, electronics, a Russian dance theme, and primal chants to Indian tabla percussion, all packed into a strong groove momentum.

Kireyev's background of combining multiple cultures, growing up near the European/Asian borders in Bashkiria, Russia, and his exposure to classical, bebop, Moldavian and Asian music dominates the recording's unique sound. But this could not be accomplished without his excellent band "The Feng Shui Jazz Project" whose members hail from various locations in Eastern Europe (Moldova, Ukraine, Tatarstan) and a percussionist who is from Senegal Africa.

The remaining tracks are in stark contrast to the title's opening salvo, revealing an assuasive flow that is melodious, contemporary, has global appeal, and delivered with engaging compositions. The languorous balladry of "Ai ya Haiya," with fretless electric bass and soft tones from Kireyev's soprano, is guided by a repeating voice chant or the mesmeric Russian homeland sounds of "Zhok" which contains sweeping guitar/sitar-like lines and contagious percussion.

Even more calming is "Lullaby" with its soothing and persuasive dreamscape that surprises with some abstract changes and Kireyev's dissonant sax work. The closing track "East" is a reprisal of the title track, its funky and outlandish pulsations further explored by the Project's members.

With a total time that's less than thirty-eight minutes, Mandala is satisfying and proof—in this current environment of overly long recordings—that creativity can be found in a tight package filled with the diversity of varied locales.