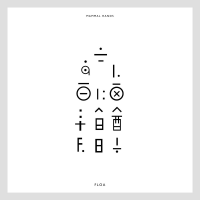 Mammal Hands debut album Animalia from autumn 2014 impressed with its emphasis on the overall collective effect over solo pyrotechnics, a choice that perfectly complemented the build and release of tension in the music. Of course in a trio set up the contributions of each member are always discernible and the twist of substituting Jordan Smart's saxophone for the bass position in the traditional piano trio gave the space that their sound needed. Floa, a Norse word for deluge or flow apparently, is the follow up to that promising debut and builds on that effective foundation while still sprinkling a few hints as to where the band might go next across its 9 tracks.

If you wanted to sum up the sound of Mammal Hands you could do a lot worse than opening track "Quiet Fire." Even the title hints at the tensions and emotions absorbed through the way Nick Smart's piano builds a minimal motif out of some light percussion before negotiating the rhythmic challenge set by Jesse Barrett's drums. The music shifts with the piano leading the rhythm until the tension is released by Jordan Smart's saxophone solo. The patterns are minimal, repetitive and extremely effective in combination pointing to a more modern concern with texture that has some parallels in modern classical, electronic and ambient music. The absence of bass though pushes this away from the more directly rhythmic path taken so successfully by, say, GoGo Penguin and more towards the feel of some Nik Bartsch, Penguin Café Orchestra or even Matt Winn's later work as D*Note in the 1990s.

Yet for all these references there are many elements that hark back to an influence from the spiritual jazz of Alice Coltrane or Pharoah Sanders, especially when Jordan Smart's saxophone is at its most expressive. "Hourglass" in particular features some invigorating tabla playing alongside a breakbeat from Barrett, set against a sax solo that has the joy of breaking free from a particularly onerous restriction. The Alice Coltrane feel is further emphasised by the addition of strings to tracks such as the relatively brief "In the Treetops" by several Gondwana Orchestra alumni. It is also worth noting that Matthew Halsall is once again in the producers chair with George Atkins, who did such a sterling job on the recent "On The Go" special edition, covering off the recording and mastering.

There is even something akin to the flow of a more traditional jazz tune on the eminently hummable "Think Anything" that sways gently through an engaging melody that remains in the head long after the CD has left the player. That this could peacefully co-exist on the same album as the more experimental, possibly metallic, percussion samples used on album closer "Shift" is a tribute to both the coherence of the group sound and the quality of the playing.

This is an album whose strengths accumulate over an extended period, the repetitive melodic motifs hooking the ear into progressively more discoveries over repeated listens. It's the sort of record where genres are shown as the artificial constructions, designed to sell us stuff, that they really are. So for all their melodic invention Mammal Hands do not, in truth, sit in the most commercial position in the market place -not wholly fitting any of the genre constructs that the lazy will fall back on. The flip side of this is that they have made a record that channels many different influences, subtly shaded by clever experiments, that if given a chance will give many hours of enjoyment. "Quiet Fire" indeed and highly recommended.

Quiet Fire; Hillum; Hourglass; Think Anything; In the Treetops; Eyes that Saw the Mountain; Kudu; The Falling Dream; Shift