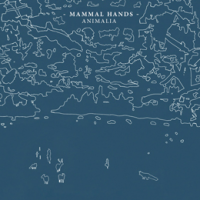 Tough economic times have seen a lot of musicians aggregate into trios of one sort or another of late. Sonically the more minimalist sound has the upside that it is more easily reproduced live and avoids the logistical and financial difficulties of maintaining a large ensemble. The trouble is that it becomes more and more difficult for trios and other small ensembles to stand out from the crowd -fine if you have the postmodern verve of say GoGo Penguin or the emotional pull of a Shalosh, but these are relatively rare beasts.

So what of Mammal Hands then. They are a trio comprising brothers Nick Smart (keyboards) and Jordan Smart (saxophone) with Jesse Barrett on drums and tabla. The line up and the absence of bass in particular does differentiate their sound somewhat, rhythm coming from the repetitive minimalist Reichian keyboard patterns around which Jordan Smart weaves sax lines that sometimes recall Pharoah Sanders. This spiritual jazz element is perhaps further emphasised by Barrett's interest in Indian classical music adding another point of difference. Also in their favour is the Gondwana records seal of approval -Matthew Halsall produces and the recording was made at the 80 Hertz studio where he and the Gondwana Orchestra cut their masterful When the World Was One. This means that the Gondwana quality control kicks in providing assurance that the music is presented to best advantage in terms of sound quality, packaging and track sequencing.

The album builds slowly, starting with "Mansions of Millions of Years" slow burn rhythmic ambience, and the more delicate "Snow Bough" that unaccountably reminds me of Paul McCartney's "Waterfalls." These tracks represent a gentle insinuation of the Mammal Hands sound world into your consciousness before the first of the stand out tracks "Kandaiki" notable for its use of looped melodies in different time signatures. This structural description belies the placid beauty of the piece and proves that it is the quality of the playing and underlying musical ideas that is paramount irrespective of the tools used to achieve the effect.

The benefit of attention to sequencing is seen in the second half of the collection where the tempo lifts with a bunch of further striking pieces that allow the listener a different perspective on the band's abilities. The first of these "Bustle" is a pretty good case study in how to build and release tension with its light, bright horn riff that rides the Reichian keyboard rhythm extremely effectively giving space for the solos to spin out of. "Inuit Party" too maintains the tempo, as the pace of the collection builds to the absolute killer track—album closer "Tiny Crumb." Apparently taking inspiration from Alice Coltrane and Joe Henderson the track starts with a chiming hypnotic piano line before the spiritual jazz saxophone theme cuts in. The Smart brothers swap back and forth trading solos, getting further and further out, Barrett's drumming rising to the challenge and introducing some effective tabla playing around the 5 minute mark as the band settle into a more spacious, mesmeric, groove for the final third of the piece. It is a tour de force and a real highlight of a fantastic debut.

The overall effect is something like GoGo Penguin might have been had they grown up somewhere quieter, away from the temptations of clubland. As we have come to expect from Gondwana releases, Animalia is designed with the listener in mind both in terms of the simple good taste of the sleeve and the care in track selection and sequencing that allows the work to be displayed to best advantage. At 40 minutes long it doesn't outstay its welcome, feeling as if designed to maximize quality for the length of a vinyl LP rather than adding anything superfluous. In "Tiny Crumb" and "Kandaiki" there are a couple of tracks to rank alongside the years finest, that suggest a trio of huge potential with a bright future ahead. Animalia would be a cracking album for a band with a dozen releases to their name let alone a debut and as such is unhesitatingly recommended.