BY MATT MARSHALL
February 4, 2009
Sign in to view read count 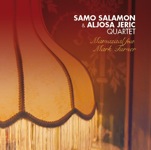 Don't expect to have your bones rattled by Samo Salamon & Aljosa Jeric Quartet's Mamasaal feat. Mark Turner. It's a subtle, contemplative work, passing with the warm glow of an evening lost to conversation and intoxicants in the likes of the album cover's ornate parlor.

At times, Salamon's guitar is breezy, providing a calm sea over which tenor saxophonist Turner can sing, swoon and squawk. But stiff peaks emerge from Salamon's ocean, sparking bright pinpricks of sound that roll into quick, almost inaudible, lines. These might terminate (as in the album's second and most powerful track, "High Heels") in grinding chords that rage Jeric's drumming and fire carbonic discharges from the horn of Turner, allowing a fully voiced blast of saxophone fury.

Salamon and Jeric share composing duties on the set—six and four tracks, respectively—and, seemingly, a philosophical affinity. The pieces work well together and meld as a whole, laying seamless fields of plush carpet, ideally set to foster the breathy, playful, weighty and occasionally aggressive debate among the quartet gathered in this European parlor.

While this is, without question, a jazz album sounded within the modernist American tradition, the flavors of Salamon and Jeric's Slovenian homeland also seep in, especially in the later tracks. Salamon's "Happy Girl" and new take on "The Shy One"—originally recorded on Jaka Berger's BRGS Time - Bas Trio (Splasc(H), 2006)—bring the album to a congenial close; the glasses raised a last time, the cigars and cigarettes snuffed out and the lamp silenced, returning the windows to the bass-bowed blackness of the Slovenian night.