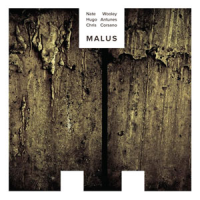 Named musician of the year in the El Intruso 2013 critics poll, trumpeter Nate Wooley looks to be on a roll. That's in spite, or perhaps that should be because, of being so hard to pin down. His output stretches from experimental solo works such as Trumpet/Amplifier (Smeraldina-Rima 2011) and The Almond (Pogus Productions, 2011), to his more tradition-orientated quintet on (Put Your) Hands Together (Clean Feed, 2011) and (Sit In) The Throne of Friendship (Clean Feed, 2013). Malus pitches midway between the two extremes, and close to Six Feet Under (No Business Records, 2012) with Paul Lytton and Christian Weber. An airy, even lyrical, quality pervades the set notwithstanding its improvised genesis and attention to novel timbres.

That melodicism stems not only from Wooley's trumpet, which at times evokes distant echoes of Sketches of Spain-era Miles Davis, but also the lush unhurried bass stylings of Hugo Antunes. Wooley hooked up with the Belgium-based Portuguese bassist in 2011, and their interactions are also documented on Posh Scorch (Orre Records, 2013), recorded the day previous to the current outing. Alongside others, that outing also includes the third member of the trio here, acclaimed drummer Chris Corsano whose credits range from Björk to Evan Parker, as well as contributing to Wooley's Seven Storey Mountain project. Perhaps stemming from the reduced instrumentation, spacious interplay forms one of the key features of this LP, accentuated by the marked channel separation of the bass and the trumpet.

While the cast changes between cuts, careful programming makes for a cohesive album which hangs together well. Judicious placement of sound and lack of grandstanding both play a large role in the collective endeavor and, as heard most notably on "Seven Miles from the Moon," they are not afraid to let silence hang between the notes. Even Wooley's most conventional playing is informed by his adventurous attitude, as on "Gentleman of Four Outs" where languid fanfares deconstruct into breathy noise. While Antunes proceeds with masterly restraint, as in the spare duet with the trumpeter's whinnies and snorts on "Sandbagged," he also revels in abstract textures, particularly in evidence in his careening bow work in duet with Corsano on "Sawbuck." Indeed of the three, the drummer proves most inclined towards propulsion, albeit with a tuned drum sensibility. Such a distinctive set prompts the hope that this threesome proves more than a one-off in Wooley's diverse discography.