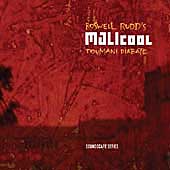 Most closely associated with free jazz and the avant-garde, trombonist Roswell Rudd is, in fact, a highly diverse player who has worked in Dixieland, not to mention the less-glamorous but equally necessary-to-survive confines of hotel resort bands. Thankfully, in the past few years his visibility has been raised once again with projects including the eclectic Broad Strokes and the two-volume Unheard Herbie Nichols. Nowhere, however, has his more melodious side been so successfully coupled with a broader sense of adventure than on MALIcool, a cross-genre recording that blends Roswell's robust sound with the rhythms and harmonies of some of Mali's finest musicians.

Following a trip to Mali in '00, where Rudd first had the opportunity to play with Toumani Diabate, a master of the unusual 21-string harp-like kora at the French Cultural Center in Bamako, the idea of a recording that featured Rudd and Diabate in a larger group context became a reality. MALIcool features, along with the kora, the banjo-like ngoni, the tuned percussion of the balafon, guitar, bass and percussion. The blend is infectious and appealing on a variety of levels. Melodic and danceable, this may be Rudd's most accessible record, yet for all its engaging characteristics, it never fails to be imaginative and audacious.

Demonstrating that there can be common ground in the most surprising of sources, Rudd and MALIcool work their way through a number of originals from Rudd and Diabate. Perhaps most surprising, however, is their version of Monk's "Jackie-ing," which imposes a triplet feel over four and gives everyone plenty of room to stretch out. Lassana Diabate's balafon states the familiar theme, but from then on it's everybody's business. Basseko Kouyate's ngoni solo is remarkable for his ability to blend the simpler seven-tone scale of traditional Malian music with a definite hint of blue. "Malijam" is another interesting piece that takes Beethoven's "Ode to Joy" and opens it up for broader improvisation by Rudd, Kouyate and the two Diabates.

Cross-cultural exchanges are a risky business. All too often the joining feels forced and unnatural. But whether extrapolating on the tender Welsh standard "All Through the Night," re-imagining Gershwin's "Summertime" on "Sena et Mariam," or kicking up the dance on "MALIcool," Rudd and the group blend seamlessly to create a sound that is fresh, ethnically rooted and completely organic.

Rudd has been touring this summer with a modified version of MALIcool, featuring Mamadou Kouyate on kora instead of Diabate, and the shows have been captivating. Hopefully, by extending the reach of the project to larger festival audiences Rudd will be able to keep MALIcool a going concern rather than a one-off project. It will be very interesting to see where Rudd takes this unusual shift in direction, if there is a chance for it to continue.