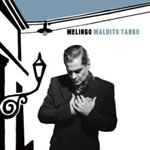 Like the Algerian singer Rachid Taha and Spanish band Ojos de Brujo, Argentinean singer and multi-instrumentalist Daniel Melingo is broadening the scope of his native music while ensuring that its cultural identity remains intact. All three artists are creating "roots" music, but the extent of their innovations means that conservative Maghrebi, flamenco and tango fans dispute that. More freewheeling listeners simply revel in the thrilling music being created.

Melingo has retained tango's characteristic instrumentation—bandoneon, clarinet, double bass, violin, guitar—while adding a treasure trove of the familiar and the unfamiliar, from trombone and baritone saxophone to the saw and steel drum. More importantly, from Melingo's point of view, is his championing of tango's street poets, the lunfardo (tango slang) specialists whose lyrics are featured on most of Maldito Tango's eleven tracks. Melingo says that his primary purpose in making the album was to restore these lyricists to their rightful place atop Argentina's cultural pantheon.

Here's a taste, from the synopses given in the liner booklet. "Pequeno Paria" is "a prayer for a child raised in loneliness, who dies without ever having been hugged and kissed, who never had any love." "Se Igual" tells of "a man shunned by society who, in the face of general indifference, sleeps in the street, takes drugs and eats what he finds in dustbins." "A Lo Magdelena" is the story of "a girl who has led a bad life, now an old woman, (who) listens to a tango that reminds her of her past, and cries."

The intense sadness of most tango lyrics is shrouded from non-Argentinean listeners. An air of gravity comes across, but not the gory details—and more than that, there's a pervasive ambience of resilience, endeavor, even positivity. In this sense, tango truly is the Argentinean cousin of the blues, cathartic and ultimately uplifting. Maldito Tango has these qualities in spades.

It also has some excitingly innovative arrangements and masterful instrumental performances. The textures Melingo creates are fascinating and utterly delicious—setting the theremin-like saw alongside rough trombone riffs, or hard-boppish baritone saxophone alongside classic tango violin, to instance just two such juxtapositions. The guest vocalists are mesmerizing too, their voices so lived-in they're sometimes practically worn through. Cristobal Repetto's role as the old woman on "A Lo Magdalena" should not be missed.

If this music is cursed, it proves one thing: the devil does have the best tunes.