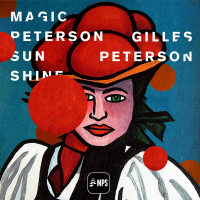 Magic Peterson Sunshine is an indispensable compilation for the European jazz lover. It is the culmination of tireless archival digging by London-based DJ and audiophile Gilles Peterson, whose obsession with the German label MPS (née SABA) has resulted in this handpicked treasure trove of material. The label has near-mythic roots, founded as it was deep in the heart of Germany's Black Forest by the reclusive Hans Georg Brunner-Schwer, a.k.a. HGBS, whose house concerts and personal studio captured and released some of the most forward-thinking jazz of the 1960s. With over 500 recordings to his credit, a catalog surpassed only by producer Manfred Eicher of ECM Records in Munich, this is the merest slice of one astronomical pie.

Some of its performers—among them John Taylor, Eberhard Weber, and John Surman—will indeed be known to the ECM aficionado, and anyone interested in that crop of innovators should take special pleasure in hearing what was happening in Germany prior to Eicher's sea change. Beyond these artists, one may draw connections to other greats, such as Edward Vesala and Iro Haarla. On the latter note, Jonny Teupen gets a nod in the form of his "Harp Revolution," off the 1969 album Harpadelic. An instrument rarely heard in jazz contexts, the harp stands out for its unexpected boldness, which at Teupen's fingertips is complemented by a tight rhythm section. Primarily a classical musician, Teupen was less interested in improvisational than atmospheric integrity. The verve of his music is almost revolutionary, as timely as ever. The harp also figures significantly in Don Ellis's "Dew," wandering among strings and muted trumpet in Grieg-like awakening. This verdant sound-painting is one of many such bursts of color on 1974's Haiku, consisting of pieces based on the Japanese poetic form.

Influential bandleader George Gruntz is spotlighted in a selection from the 1967 album Noon in Tunisia, which was part of the label's "Jazz Meets the World" series. Gruntz is both composer and pianist, sharing the studio with Sahib Shihab, Jean-Luc Ponty, Daniel Humair, and Eberhard Weber, along with a group of North African musicians. The resulting Bedouin jazz is entirely indicative of the label's wanderlust. Dissonant flute and dense pianism, plus vibrant percussion beneath and Ponty's sky-scraping vibrancy, make this a cool ride. Other pianists give their uniquenesses a spin on the Magic Peterson Sunshine roulette. Eddie Louiss's "Out of the Sorcellery" (Our Kind of Sabi, 1970) finds the Frenchman in the company of saxophonist John Surman and drummer Daniel Humair, while John Taylor's Trio conjures up "White Magic," a bonus track that appears only on the CD edition of this compilation. Taken from the British pianist's Decipher (1973) and recorded between projects with John Surman/Alan Skidmore and Azimuth, this post-bop origami sports crisper edges than Taylor's better known voyages on ECM. Another early ECM'er is Wolfgang Dauner, whose "Love in Summer" references the trio album Jazz-Studio H.G.B.S. Number One, a 1962 rarity from MPS's SABA era. Its hand-drumming and smooth finish make it one of Dauner's finest showings on record.

Mary Lou Williams fronts the MPS legion of artists at the keyboard. Her take on the George and Ira Gershwin evergreen "It Ain't Necessarily So" is a feather in the cap of her five decades-long career and showcases her supernal touch. Culled from the album Black Christ of the Andes, which was acquired by SABA in 1965, it is among the more invaluable of Peterson's recoveries. Pianist Ewald Heidepriem leads The Modern Jazz Group Freiburg in an upbeat rendition of the Jimmy Heath tune "Big 'P,'" while Belgian piano man Francy Boland fronts a 21-piece string orchestra in the lounge music confection that is "Lillemor" (Flirt and Dream, 1967). Walking that same bridge of sunshine brings us to The Singers Unlimited, a vocal group from Chicago founded by Gene Puerling, who recorded a string of albums for MPS. "Stone Ground Seven" comes from 1977's Just in Time and features the Roger Kellaway Quintet at the rear. This wordless reverie feels like the most carefree vision possible of the 70s, wrapped in smoothest warmth. Same goes for The Third Wave, a pop jazz ensemble consisting of five Filipino sisters who were brought to Germany to record Here and Now for MPS in 1970 under the auspices of keyboard legend George Duke. The present selection, "Love Train," is a superlative find, having been released only as a single. Mark Murphy's "Why and How" brings us home. Midnight Mood was his only album for MPS, but from this song alone we can hear all the trademarks of this iconic singer. An agile backing band lifts his voice to the heavens, where it surely regales still.

Less familiar names offer comparable delights. An adaptation of Manuel de Falla's "Canción del Fuego Fatuo" by Spanish saxophonist Pedro Iturralde represents the album Flamenco-Jazz, another "Jazz Meets the World" entry and featuring a very young Paco de Lucía (though he seems hardly audible, if at all present, in this selection). Multi- instrumentalist Gunter Hampel and his quintet bring a likeminded feeling of movement to "Our Chant" (Heartplants, 1965), a watershed moment in free jazz that shows off the abilities of drummer Pierre Courbois, trumpeter Manfred Schoof, and pianist Alexander von Schlippenbach—to say little of Hampel's own as composer, arranger, and leader—to vivid effect. Further out in the solar system, Austrian musician Roland Kovac leads an orchestra of talents culled from the Kurt Edelhagen Big Band in "Service I" (Trip to Mars, 1968). According to the liner notes, this quirky album was conceived as "an advertising gag for an atomic power plant" that was never built. Seizing the opportunity, MPS took over the production and birthed a cult classic. Another brilliant obscurity is Wolfgang Lauth's "Denn Liebe ist stark wie der Tod." This self-styled "cantata for choir and jazz combo" is a rare example of European sacred jazz. Released as a 7-inch single in 1968, it is a flowing piece that conjoins winds, piano, and voices in fluent intimacies.

Magic Peterson Sunshine is a vital document of transitions in continental jazz and its crossovers in both directions across the Atlantic.