By HRAYR ATTARIAN
December 11, 2010
Sign in to view read count 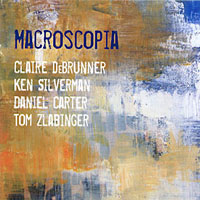 The theme of Macroscopia is the universality of music, expressed as group improvisation by four superlative musicians. The quartet includes classically trained bassoonist Claire DeBrunner, an alumna of the Lennie Tristano school of free jazz via her mentors Lee Konitz and Connie Crothers}}; guitarist/percussionist Ken Silverman, who is heavily influenced by world music; reedman and trumpeter Daniel Carter, a veteran of the avant-garde bands of Cecil Taylor and David S. Ware; and ethnomusicologist/bassist Tom Zlabinger.

Silverman's Spanish-sounding guitar and Zlabinger's thumping bass set the rhythmic tone of "Mysterious Breath" a piece, characterized by the deeply mystical and brooding conversation between DeBrunner and Carter (on clarinet).

The jazzy guitar solo on "Dumbo Twilight" creates the mood that is enhanced by DeBrunner's sound—which resembles an avant-garde baritone saxophone—and Carter's bluesy trumpet, all anchored by Zlabinger's pizzicato bass lines. The piece does meander a bit near its end, as the momentum slacks slightly. Repetitiveness also plagues the latter part of the otherwise intelligent tenor and bassoon duet, "Life Rattle," which features Silverman's percussion and guitar enhancing the dialogue, as well as the folk ballad-like "Totem Dance," which starts with Silverman's percussive oud work; the subsequent trumpet, tenor sax and bassoon improvisations are punctuated by the Arabian lute's mournful solo.

The two shorter tracks—"Riff Tide" and "To Move As A Shadow"—are dark and Cinematic, with bassoon, tenor sax (on the former), trumpet (on the latter), and guitar echo each other over Zlabinger's atmospheric repetitive vamps.

Despite occasionally flirting with monotony this is a thought-provoking work of powerful improvisation that draws on various influences to create a unique entity.