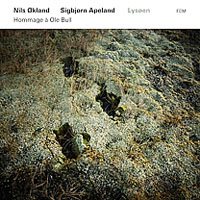 The problem with being tagged as traditional is an inherent and immediate perception as being somehow retro or backwards-looking when, in truth, traditions ought to be living, breathing things whose definable frames of reference aren't necessarily confined by them. Norwegian violinist Nils Økland and pianist/harmonium player Sigbjørn Apeland know this better than most; in their 1982 trio, with drummer Øyvind Skarbo, they mine a most contemporary kind of free improvisation that can't help but be informed by the traditional Norwegian music that's been a consuming focus for the entire trio. Lysøen, with Økland and Apeland sharing the marquee, harkens back to an earlier time in its homage to violinist/composer Ole Bull (1810-1880), who bought the island of Lysøen, off the coast of Bergen, in 1872, building an opulent summer home that remains an attraction to this day.

While overt extemporization went out of vogue with classical musicians in the 1850s, Bull remained known as a powerful improviser, drawing on a broad variety of sources both internal and external to his native country. A relative contemporary of Edvard Grieg—who became better-known internationally for his Peer Gynt suite—Bull was a mover and shaker in his own right, soliciting parliamentary funding (but, sadly, refused) for a Norwegian music academy to focus on the country's rich tradition. In a program that combines Bull originals with uncredited traditional sources, new original music and a couple of spontaneous compositions, Økland and Apeland give Bull the attention he deserves, with a recital that brings Norwegian traditionalism into the 21st century—or, at least, demonstrating that this music remains timeless in a new millennium.

"Belg og slag" harkens to contemporary minimalism, with Økland striking, rather than drawing, his bow over the strings, creating a persistent eighth-note pulse with shifting harmonics—a concept explored solo, to even greater effect , on "Solstraum"—under which Apeland's rich harmonium creates a slowly unfolding landscape. "Grålysning" is more tranquil, Apeland's piano giving its harmonic stasis life like gentle ripples in a pond, while Økland's remarkable bow work—sometimes so delicate as to be more like breathing—hints at an unexpected link with Poland's Zbigniew Seifert, who mined similar modal territory but with more passionate fire on "Stillness," from the late violinist's Man of the Light (MPS, 1977).

Two versions of Bull's appropriately titled "La Mélancolie" nearly bookend the disc, one with piano (and a lengthy a capella intro), the other harmonium, while the traditional, "Sylkje-Per" is similarly treated, the harmonium-driven version possessing a soft majesty, while its piano-based sister, a solo feature for Apeland, evoking a more pastoral feeling.

Throughout, Økland and Apeland's instrumental mastery and adherence to the core of each song creates a compelling entry point into music largely overlooked and ultimately forgotten, but deserving another look more than 130 years after its source left this mortal coil. More than any of its other many successes, Lysøen: Hommage à Ole Bull suggests that international attention on Norway's music scene is, in fact, a latecomer to a party that's been going on for two centuries. Time to catch up.