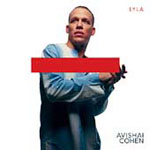 Combining Latin sources and electronic dance grooves with sampling and textural elements, pop covers, solo piano, and traditional jazz methods, Avishai Cohen has without a doubt succeeded in creating a truly multi-genre album. Lyla not only presents music from diverse sources, but shows Cohen's willingness to blend and blur genre lines to establish a modern, heterogeneous phenomena. Unlike many similar undertakings, Cohen's music doesn't feel facile or cursory, and transplanted musical elements never seem to be misplaced, tagged-on, or the result of marketing ploys. In fact, even when results are flawed, each track resonates with an honest tone of genuine musical interest and knowledge. Ultimately, it is even difficult to discern which elements are transplanted and which native.

At its worst, Cohen's songwriting comes across as charmingly earnest, as with the indulgent pop tune 'Lyla.' At its best, Cohen displays a rare capacity for melodic depth and emotive articulation, as on the solo piano piece, 'Structure in Emotion' and the acoustic bass piano duet with Chick Corea, 'Eternal Child.' 'Structure in Emotion' may very well be the album's highlight, revealing both Cohen's connection with Corea and a mature sobriety which combines technical facility with a poignant control of color and form. This solo piece floats between the so-called classical piano style and jazz performance idioms, flowing back and forth across the dividing line so intuitively that the result proves a total integration.

The remaining tracks on the album explore a broad range of material, including a cover of Dr. Dre's 'The Watcher,' whose driving rhythm presents a simple, solid reference point that effectively balances the complexity of 'The Evolving Etude' and the softer 'Eternal Child.' Cohen also offers a frenetic cover of Lennon and McCartney's 'Come Together' on bass with drummer Mark Guiliana exploring the original's rhythmic draw alongide Cohen's improvisation. It would be a shame to reveal all of the album's musical and programmatic surprises, of which there are many. Listeners interested in experimentation and musical cross-breeding are bound to enjoy the sheer challenge of Cohen's endeavor and will mostly likely find individual tunes of great worth. Cohen's compositional and instrumental skills have already been well proven, and with Lyla Cohen declares himself an artist willing to reach beyond both the market's safety zone ' and his own.