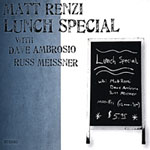 Lunch Special should win a marketing award for having the freshest CD design concept, although the actual photo of linguine with oysters used as the CD imprint may not be as fresh as the music itself. At least the designer was nice enough to reveal a relatively clean plate inside the tray card once the CD is removed. However, a long and winding piece of linguine is not a bad way to describe a typical sax line from Matt Renzi, and the whole plate could represent his trio sound. (Who is the oyster, though?)

Renzi's affinity for the trio dates back to his days in New York when he was rooming with bassist Masa Kamaguchi. Drummer Jimmy Weinstein dropped by and heard some amazing tenor sax music coming from upstairs, and the two were introduced. After a time he played a duo session with Renzi, which led to Lines and Ballads (Fresh Sound, New Talent, 1999), the first of many trio recordings with no chordal instrument.

Renzi has a rare ability to tie lines together that drift over melody and rhythm—floating over such barriers as if unnecessary, while somehow remaining within a song's thematic center. Triplets become quintuplets, which become something in between. Renzi must be the most polite free jazz player there is, playing up, down, and all around the melody, while never quite letting on that he's doing anything wrong, as he remains sonorous and pleasant in the midst of panoramic leaps of faith.

Lunch Special uses what is called the Matt Renzi Trio, with Dave Ambrosio on bass and Russ Meissner on drums. Ambrosio is able to match Renzi's mood and has tone for days on his upright bass. Meissner plays with restraint, quirkiness, and a creativity that spurs the others on to new ideas. The combo has toured and recorded internationally, and each understands how to meld into a collective creativity that combines swing, rock, tango, ballad and free forms of rhythm, as the song requires. Renzi, whose father and grandfather were both world-class symphonic woodwind players, went on from Berklee to receive his MA in Classical Composition from San Francisco State. He brings a classical discipline to his approach towards handling his reeds and tone, while simultaneously and thoroughly understanding jazzspeak.

Many of the album's 10 tracks carry forward the lighthearted theme. Song titles such as "Chopping Mall," "Happy Hour," "School's Out," "Chicken Soup Dance," and "Lunch Special" suggest a humor that music in this genre often lacks. But don't be fooled. Although the musicians don't appear to be taking themselves too seriously, the music is bold, fresh, and deliciously creative.