By George Kanzler
April 8, 2008
Sign in to view read count 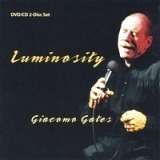 In the DVD interview and introductions to tunes on both discs, Giacomo Gates mentions a lot of the usual suspects as influences: Sinatra, Crosby, Jon Hendricks and Betty Carter. But names like Babs Gonzales, Jackie Paris, Cab Calloway and Lord Buckley suggest that Gates is in touch with a deeper tradition, that he likes the hustlers, entertainers and saloon singers as much as he does the hipsters, beats and artists. Maybe that's why Gates always sounds and looks like he's having such fun when he's in front of a microphone.

Like Gonzales and some of the saloon singers he admires, Gates has a rough and ready voice, a fairly low baritone with a slight sandpaper edge, plus an easy way with phrasing reminiscent of the underrated Dean Martin. And as is evident throughout and visible on the DVD, Gates handles himself like a musician, part of the band. Whether scatting or turning a melody around when reentering after a solo, Gates shows he's been listening to what's been going on around him.

And he takes his admiration of those singers he mentions beyond lip service, actually doing songs they did, thus discovering them anew for this generation of listeners. Hence we get "Me, Spelled M-E, Me," a song written for Babs Gonzales by guitarist Dickie Thompson, as well as "Beginning of the End," a resonant ballad that Gates found on a Gonzales recording. Bobby Troup, another Gates favorite, is represented not by the predictable "Route 66," but by "Hungry Man," which yields such rhymes as "turkey/Albuquerque," "banana/Butte, Montana" and "tuna/Laguna." And from the Joe Derise book he's unearthed the 'happy blues,' "The Blues Are Out of Town," given to him by its lyricist, Marcia Hillman.

One of the chief pleasures of this package is the repertoire, a goldmine of hidden gems as well as a clutch of well-considered standards such as "P.S. I Love You," "Comes Love" and "Since I Fell for You"—that last with a long Lou Rawls/Isaac Hayes-style spoken intro. There's also deserve-to-be-standards like "Someone's Rocking My Dreamboat" and "Romancin' The Blues"; surprises including Jimi Hendrix' "Up From the Skies" and Gates' funky rap, "Full of Myself" and utterly unpretentious (other singers please note) vocalese courtesy of wordsmiths Jon Hendricks, Eddie Jefferson and on "Peace of Mind/Let's Cool One," Gates' own words to Thelonious Monk.