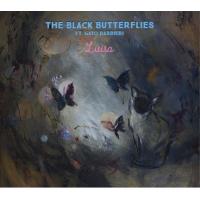 It's a rare musician confident enough in his or her abilities to subsume their own name under a group moniker, but even as saxophonist/composer Mercedes Figueras maintains her independence via a personal presence on the web under her own moniker, she has taken that humble step with the Black Butterflies. Coalescing in 2010, the quintet's previous self-produced albums, 1 De Mayo and Rainbows For Ramon, are both as accessible as they are durable and this new one follows suit.

Luisa, however, has sonic twists manifesting real growth, including most prominently Levi Barcourt's keyboards, usually in the form of crisp electric piano. As on "Merceditas," that glowing sonic texture nicely offsets the warm emotionalism of the leader's sax playing as well as that of the late Gato Barbieri, whose contributions here comprise his last recorded work. The near-whispered vocal on the title track here might have interrupted the luxurious atmosphere created to that point on the record if in fact it did not sound like the introduction to a deepening dreamlike state as introduced on "Hambone"/Adios Nonino" by the vibes of Karl Berger (band mate of Barbieri half-a decade ago).

In keeping with the multiple symbolic interpretations of this band's namesake insect, bandleader Figueras' playing is, in turns, insinuating and squalling, often on the same track, as happens on the homage to 'The Cat,' "Gato's Hat." Saxophonist Tony Larokko's own spirited horn interaction with her ratchets up the intensity of that cut too, while the pulsing percussion, courtesy Fred Berryhill, Bopa "King" Carre and drummer extraordinaire Kenny Wollesen, elevates the heat even further.

Figueras is a composer of no small talent, and while there are but a pair of original tunes here, Luisa showcases that virtue of hers to great effect by the juxtaposition of her originals with works from Astor Piazzolla (the aforementioned opener) and McCoy Tyner ("Love Samba"). In fact, "Brother Nacho, Sister Lola" is arguably the best cut on the album, cooking from the very outset for the whole of its five-minutes plus duration.

Virtually identical in length to the easy sway of the aforementioned jazz piano icon's number here, "Por Una Cabeza" brings Luisa to a close with some finality, but no small amount of taste and discipline either, not to mention a palpable joy that resonates long after the music stops. That latter attribute alone is the mark of a worthwhile entry into any jazz collection, but this record boasts many other virtues as well.