Home » Articles » Taylor Eigsti: Lucky To Be Me

Taylor Eigsti: Lucky To Be Me 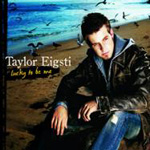 To play with veteran jazzmen like Christian McBride and Lewis Nash at the tender age of 21, you have to have both talent and a good dose of confidence. Pianist Taylor Eigsti possesses both of these traits and then some, as his first album on Concord, Lucky To Be Me, indicates.

McBride and Nash accompany Eigsti on bass and drums, respectively, on half of the album's twelve tracks. Sometimes the trio is augmented by Julian Lage's guitar, and a couple of tunes include horns, largely for background passages. A different rhythm section comprised of bassist James Genus and drummer Billy Kilson performs on "Freedom Jazz Dance, "Darn That Dream and Eigsti's own "Argument, adding variety to the album by showcasing the pianist in different trio contexts.

The disc begins boldly with a reading of John Coltrane's classic composition "Giant Steps. Eigsti plays a ruminating introduction before stating the theme in a static manner with McBride and Nash, then improvising with gusto over the quick tempo. McBride's crisply articulated solo is worth repeated listening; even in the fastest of passages, the individual notes can be clearly heard.

The next track, an original entitled "Get Your Hopes Up, adds Lage's guitar. The leader shows a strong Keith Jarrett influence here; still, his chops are solid for someone so young. Piano and guitar trade fours as the piece draws to a close. It's back to the trio again for a funky, yet brief version of Cole Porter's "Love for Sale. McBride contributes a nice counter-line to the theme statement. The bassist also solos first, briefly, on "Promenade, showing off his great, deep sound and solid intonation. The leader rattles off a few sinuous snakes at the beginning of his solo, before returning to the melody.

"Freedom Jazz Dance, the penultimate track, allows Eigsti to display his prodigious technique while stating the theme. He builds his solo to a feverish pitch, and Kilson and Genus match his intensity. After Kilson's solo, Eigsti plays the theme again, but in a distinctly different way. The album concludes with a solo piano interpretation of the Leonard Bernstein title track.

While Eigsti hasn't quite developed a truly personal conception yet, he shows enormous talent and ability on Lucky To Be Me. McBride's contributions alone are remarkable, but if you haven't heard of Taylor Eigsti, you'll be in for a pleasant surprise.

Paul Ryan is a freelance writer and jazz aficionado.