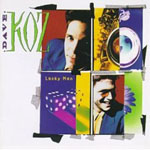 This album features one of my all time favourite cuts entitled "Tender is the Night" featuring the velvet tones of Phil Perry. With serious airplay by most Smooth Jazz stations in the States, it has deservedly become a prime-time smash from coast to coast. This haunting melody glides along until the second verse when Phil Perry adds his silky voice to an already dazzling 22-carat sound. Indeed the cd is worth buying just to have this cut.

The similarities to a number of other saxophonists are there, but still Koz's smooth style glides the listener along a David Sanborn / Kenny G type journey which has that great Lorber backing on most of the tracks.

The self-penned "Faces of the Heart" are smooth and easy a la G's "Songbird" with strings whilst the African arrangement of Dennis Edwards funk classic "Don't Look any Further" uses today's hip-hop sound to provide a mid-tempo groove which is a super cut for the summer dance floors.

The "Saxman" is a dance floor shaker which has been featured as a commercial talkover cut for many years and one for a that long summer drive down the highway. "After Dark" is another meltdown cut featuring Jeff Lorber on keys and Paul Jackson on guitar and trucks along as another drive-time track. The title track "Lucky Man" features Charles Pettigrew on vocals and could be a soundtrack vocal for a movie. (This cut is made for a duo with Diana Ross). Excellent ballad.

Dave Koz will never achieve the stature of a Kenny G or a David Sanborn, but he has carved out a niche for himself with his warm and velvet tone. "Lucky Man" has its moments, and one of them is "Tender is the Night."