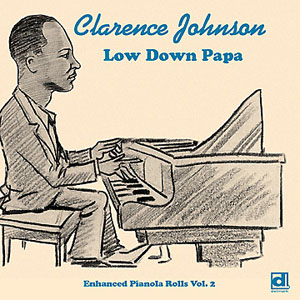 Pianist Clarence "Jelly" Johnson recorded for the Paramount label between 1923 and 1925. He was also accompanist to Chicago blues singers Sodarisa Miller and Edna Taylor amongst others, and recorded piano rolls in New York for the QRS label alongside James P. Johnson and Fats Waller. But, apart from that, very little is known about him, which of course makes this restoration of his nickelodeon piano rolls a cause for celebration.

Originally captured for posterity by the Capitol Music Roll Company towards the end of the 1920s, they reveal a blues pianist of unusual sophistication, even while it's apparent that Johnson also knew how to draw an audience. His take on the down home idiom is leavened by sly, persuasive wit on "The Bye Bye Blues" by way of example, with the mobility in his left hand lending the music an airy quality.

The spirit of "It's All Over Now" is a reminder that the bad and good elements of life can come at one and the same time, while Johnson's undoubted ability to take a line and transform it is readily apparent. In so doing his work embodies an optimistic outlook even while those bad elements are intent on having their way.

As with a couple of the other performances in this program "Dyin' With The Blues" is emphatically affirmative of life, but the paradox between title and feel has arguably always lain at the very heart of the blues. The combination of Johnson's hands and a little imagination is enough to evoke not only the image, but also more than a little of the environment of a South Side speakeasy —on a sun-kissed avenue, of course—circa 1927.

Joe "King" Oliver probably knew all about such places, which is why "Joe Oliver Blues" has an extra layer of resonance. On this one Johnson also shows how he had what might be called a "proto-boogie woogie" left hand, as the figures he rolls out predate the popular peak of that form by about a decade. The occasionally shaky syncopation might be down to deterioration of the source material as much as anything, but such is the power of the performance that its substance is easily grasped.

The Delmark label deserves a heap of kudos for venturing where less loving concerns either don't or won't go. In this instance it's restored a program of music which offers further insight into the very dawn of the forms this website is devoted to.

Moanin' The Blues; It's All Over Now; Have Mercy; Dyin' With The Blues; Graveyard Bound; Corn Trimmers; That's Your Yass Yass Yass; The Bye Bye Blues; Five O'Clock Stomp; Houston Blues; Gotta Be Booked Blues; I Wish You Would; I'm Going Away Just To Wear You Off My Mind; Gulf Coast Blues; You're Always Messin' 'Round With My Man; Low Down Papa; Jelly's Blues; He May Be Your Man; Joe Oliver Blues; You Shall Reap What You Sow.