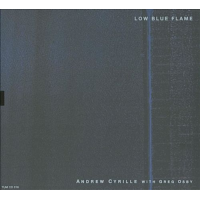 "Every once in a while, the saxophonist and drummer just have to be alone. So said the venerable tenorist Benny Golson in concert a few years ago, a coy grin creeping over his face, before launching himself into the stratosphere against his drummer of the evening. "Against, because that's often the form the sax/drums duet takes—a no-holds-barred, take-no-prisoners, raucously unrestrained and joyfully unapologetic, cacophonous battle to the finish line. On Low Blue Flame however, drummer Andrew Cyrille and saxophonist Greg Osby are after something else: melodic improvisation within a tight compositional framework, with intensity coming not from highflying pyrotechnics but synchronized, concentrated searching. Recorded in New York in early 2005 and released on the invaluable Finnish label TUM, the disc is about sparks, not fireworks—though these two masters, who first played in duo at New York's late, lamented Tonic in early 2004, work off each other so well the sparks often come by the shower-full.

Rarely does Osby resort to the honks and squeals one would expect from this type of encounter, instead using his trademark lacerating tone to plumb the depths of each number—seven by Cyrille and five by Osby, plus Thelonious Monk's rarely performed "Work —to its harmonic limits. And he's in particularly fine form on soprano, twirling and spinning his way through Cyrille's odd-metered, 13/4, "The Music in Us, while never once losing sight of his partner.

Yet the album is dominated by Cyrille, even though he lays out completely for a couple of tracks. Long one of jazz's premier percussionists, Cyrille has been working the duo format for years now, recording with artists including saxophonists Jimmy Lyons, Anthony Braxton and Peter Brötzmann, pianist Marilyn Crispell, bassist Peter Kowald and drummers Kenny Clarke and Michael Carvin. Approaching seventy, he's probably more qualified for a tandem disc like this than just about any other skins-man on the planet. Whether shading with an abrupt flurry, coloring with a handclap or propelling with a generous bar of sudden silence, Cyrille's resources are seemingly limitless, his instincts uncanny and his choices startlingly right. He is, in short, magnificent and anyone interested in the varietal possibilities of the drums would do well to check out this disc. In fact, "Roscoe, the album's closer, might be mandatory listening for all budding jazz drummers; an improvised solo Cyrille piece dedicated to saxophonist Roscoe Mitchell, it's an abject lesson in the expressive power of quiet space and cunning restraint.