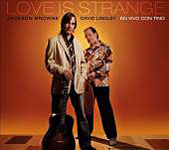 Recorded over five nights of concerts in Spain during March of 2006, this double-CD reunites Browne and Lindley, who collaborated as band mates during most of the seventies and into the early eighties, albeit in a markedly different context. Accompanied by native Spanish musicians, the two rediscover the truths about the human condition that lie within songs such as "Late For The Sky" and "For Everyman," as fully as they romp exuberantly through "Mercury Blues" and "El Rayo X."

Yet the performances of the latter, taken from wizard multi-instrumentalist Lindley's solo career, radiate no less joy in the playing and singing than is readily palpable in a markedly different approach or choice of material. For instance, with the whistle of Carlos Nunex played off against Lindley's fiddle, the delight is somewhat muted during the eerie exoticism of "The Crow and The Cradle," but is palpable nonetheless and, more importantly, as uplifting as the best of all of Browne's recordings.

Browne's liner notes are like a travelogue from a group vacation shared by old friends, and certainly the music radiates that level of warmth, accentuated by the mutual love of music among the participants. It is, in fact, akin to the reunion of old friends after a significant time apart to hear the likes of "I'm Alive" in an acoustic setting, where Tino de Geraldo's soft(er) percussion cushions the authoritative strumming of the author as well as Lindley's nimble Hawaiian guitar.

The choice of songs is clearly designed to allow for personal expression via the lyrics, such as on "Call It A Loan," but also for instrumental atmosphere. The Indian strains that decorate "Looking East" are one of the most effective instances, but only a little more so than "Your Bright Baby Blues," where Lindley's tart guitar fills reflect the words' gentle bite.

"The Next Voice You Hear," at nine minutes plus, is a combination of those two superficially separate approaches to the music, while the presence of Luz Casal's gentle solo voice elevates the gorgeous melancholy inherent in "These Days." And there's just enough lightheartedness here, especially in "Love Is Strange/"Stay," to offset any overweening solemnity that might arise from such moments.

Love Is Strange is as much of a showcase for the skill of Jackson Browne's musician friends as himself or his own music. As such, these shows represented a gesture of great generosity on his part toward both his musical comrades and the audience, a sensation that clearly carries over into a set of CDs that's packaged as ingeniously as the music is arranged and played.

I'm Alive; Call It A Loan; Looking East; The Crow On The Cradle; Mercury Blues; El Rayo X; Sit Down Servant; Take It Easy; For Taking The Trouble; For Everyman; Your Bright Baby Blues; Tu Tranquilo; Late For The Sky; These Days; Running On Empty; Love Is Strange/Stay; The Next Voice You Hear.