By Dan Bilawsky
February 22, 2018
Sign in to view read count 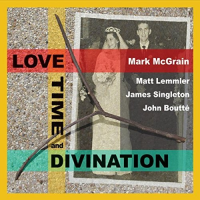 Love + Time + Divination, a drummer-less trio date enhanced with a few appearances from New Orleans vocal treasure John Boutté, contains three timeless classics that fit McGrain's original mandate. In that category there's a comfortably-paced NOLA stride take on "As Time Goes By" highlighting the duo rapport between a plunger-muted McGrain and pianist Matt Lemmler, an appropriately breezy "I Thought About You" with a charming Boutté out front, and an album-closing "I Can't Get Started" that opens on a grand trombone cadenza before settling in. Those known numbers provide a good indication of the sonic sensibility surrounding the whole project, offering a clear view of the way these musicians interact and jell. But they don't make for a full representation of what this album is all about. In order to understand that, the other tracks need to enter the equation.

Seven of the eight numbers that remain come from McGrain's pen, with each one touching on a different territory. "It All Comes Down To Love" plays as a vocal-centric paean to affection, "Blossom" flowers with bop-ish bravado, "3:27AM" juxtaposes contemplative ideals against a buoyant flow, and "Hola Brah" adds a dose of salsa sizzle to the mix. Further on, "Étreinte Bleu" offers a pensive picture, "Arise" swings straight down the middle, and the title track takes to the dance floor as a slow and sleek rhumba.

McGrain's arrangement of Pink Floyd's "On The Turning Away" proves to be the one outlier in this program mixing originals and older chestnuts, but it's a most welcome anomaly. Boutté's voice brilliantly bears the weight of the words, the music is careful to balance solemnity and hope, and what results is positively stirring, to say the least. To witness this catharsis and hear Love + Time + Divination in its entirety is to breathe deeply of New Orleans' life-affirming air.

As Time Goes By; It All Comes Down To Love; Blossom; 3:27AM; On The Turning Away; Hola Brah; I Thought About You; Étreinte Bleu; Arise; Love, Time, And Divination; I Can't Get Started,