By Glenn Astarita
February 17, 2006
Sign in to view read count 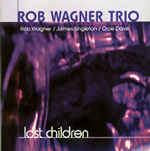 Modern/free jazz saxophonist Kidd Jordan is arguably New Orleans' most forward-thinking artist, manifested in his freeform endeavors with drummer Andrew Cyrille and work with pianist Joel Futterman, among others. Multi-reedman Rob Wagner can be added to the same list of New Orleans' more adventurous jazz practitioners. And while Hurricane Katrina has forced many folks into evacuation mode because of a lack of work and other problems, Wagner has imprinted his stamp of jazz modernism within the region.

Presently in New York City, Wagner will be returning to the Crescent City with the intention of resuming his ongoing stint at the French Quarter's classy venue known as d.b.a. He also performs with the New Orleans Klezmer All-Stars, but like many displaced New Orleanians, a glimmer of hope prevails as the artists and club owners strive to get the area's cash flow back on its feet.

Wagner's third effort looms as an extension of his previous solo endeavors. With his trio, the saxophonist explores variable structures within these multidirectional works. On "Wash Away Our Sins, the band pursues linear movements amid contrapuntal unison passages and a muscular presence. Wagner conjures up notions of sax hero Sam Rivers through his snaky, soprano lines during the trio's whirling-dervish presentation on "Lost Children. Here and elsewhere, the musicians generate a rising tide with graduating choruses atop drummer Ocie Davis' polyrhythmic pulses. Bassist James Singleton employs loops to complement his ethereal arco passages and single-note unison runs with the saxophonist.

In other areas, the band perpetuates breezy swing vamps and toe-tapping vibes. They exude chutzpah and an overriding sense of intimacy throughout these largely engaging workouts. Without a doubt, this unit warrants attention; Wagner triumphantly dispels New Orleans' stigma as a traditional and severely conservative jazz community. Strongly recommended.

Wash Away Our Sins; Early; Lost Children; 2068; Little Lamb; Talking in Sponges; 33 Nights with Mars; Night Before; When Sax was King.