By John Kelman
January 4, 2007
Sign in to view read count 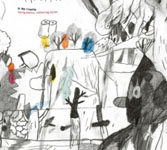 Leaving behind the staid piano trio tradition, In the Country broke new ground in 2005 with its Rune Grammofon debut, This Was the Pace of My Heartbeat. Unlike the more assertive Bad Plus and the generally more refined EST, this Norwegian trio managed to create a new paradigm for Grammofon's first self-described "jazz" record, one that was high on resonance and short on shtick. While the same could be said for EST's early days, they've become predictable lately—and in many ways emphasize a virtuosity that was always there, but never the point, when they first emerged over a decade ago.

Losing Stones, Collecting Bones is a more approachable record than This Was the Pace, but that's no suggestion of artistic sellout. Pianist Morten Qvenild continues to mine references as diverse as Paul Bley, Morton Feldman and Oliver Messiaen with compositions that are often filled with space. But this time around, they lean a little more to groove—though you'd be hard pressed to actually find drummer Pål Hausken playing a solid backbeat. Even on "Don't Walk Another Mile," one of a handful of vocal tracks, Hausken's delicate pulse shifts emphasis as the meter changes.

Qvenild's harmonically rich language extends beyond the conventional jazz vernacular to embrace a folksy elegance brought to the forefront on two tracks featuring guest guitarist Marc Ribot. The repetitive nature of "Can I Come Home Now" suggests, in fact, how Bill Frisell's roots music might sound if his usual folk sources were something other than American.

In the Country's music may sound simple, but there's more to it than meets the eye. "Kung Fu Boys" begins with a contrapuntal theme divided equally between Qvenild, Hausken and bassist Roger Arntzen, while the gentle "My Best Friend is a Dancer" never loses focus, despite its episodic nature. The gospel tinge of "Ashes to Ashes" mirrors the similar penchant of a fellow Norwegian, Tord Gustavsen. While both In the Country and Gustavsen's trio share an interest in the rich potential of a narrow range of tempos, Qvenild, Hausken and Arntzen aren't afraid to shoot for greater drama on occasion.

The communicative nature of In the Country's music is often so subtle that it's more a feeling than something one can put one's finger on. Often it's as simple as where a note's placed, or how long it's allowed to linger.

Listeners who are too attached to the American jazz tradition will likely find little of appeal here. But for those who believe that improvisation, interaction and emotional resonance can occur across a broader spectrum, Losing Stones, Collecting Bones will be a welcome breath of fresh air.

My Best Friend Is a Dancer; Hello Walt; Ashes to Ashes; Everyone Live Their Life; Medicine Waltz; Take Me Over; Torch-Fishing; Bear; Can I Come Home Now; Kung Fu Boys; Don't Walk Another Mile.