Lama: Look What You Made Us Do 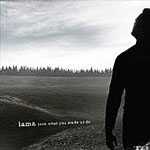 Its performance rattled more than a few cages at Punkt 2008, in Kristiansand, Norway. Still, Lama's debut, Guidebook to Lamaland (Spoon Train Audio, 2008), was really a solo album hiding beneath a group name, with the exception of one cathartic live track that featured the full group. Lama's sophomore disc, Look What You Made Us Do, is still the brainchild of the group's leader, songwriter and multi-instrumentalist, Nils Marten Larsen. But this time it's a flat-out group effort and, consequently, is a more dynamic disc with greater energy over a broader aural landscape.

Larsen remains the group's songwriter and producer, though keyboardist Andreas Stensland Løe (also a member of the innovative trio, Splashgirl) and drummer Andreas Lønmo Knudsrtød are listed, amongst others, as co-producers. Arrangements are credited to the group, a clear indication that Larsen sees Lama as a collective that brings individual voices and ideas to the mix, even if he's the group's primary mover and shaker.

Like Guidebook's "Fighting Your Shadow—which is reprised here simply as "Fighting"—the opening "Beginning" is an anthemic rocker despite, much like Lama in performance, taking its time getting to the thundering climax of jagged electric guitars, pulsing bass and pounding drums. "Wakeup Call" is equally propulsive, but driven by layers of acoustic guitars it's a less ear-shattering setup for the initially gentler "Then You'll See," with Larsen's soft voice over a hypnotic soundscape of chiming keys, bowed strings, and electronics. When the group enters, it takes Larsen's lyrical melody and kicks it into high gear with a series of shifting, recontextualizing harmonies.

9 As with Guidebook, electronic soundsculpting lies beneath much of the group's sound, and Larsen's vivid motifs—either sung wordlessly or with simple yet affecting lyrics—drive music that's part Jaga Jazzist, part Radiohead, and part Sigur Rós. Just as artists like Jan Garbarek and Terje Rypdal have influenced an entire generation of younger Norwegians, it's encouraging to now see that some of those artists have become touchstones for even younger groups, as Lama also touches upon Eivind Aarset's sonic explorations and Motorpsycho's curious blend of psychedelia, folk, and jazz. Categorizing music with such broad purview is increasingly difficult, but ultimately it's just not that important. The key markers here are strong melodies propelled by rhythms that are, at times, visceral and energetic, elsewhere soft and ambient-like.

The most dramatic evolution on Look What You Made Us Do is, in addition to turning Lama into a performing collective, Larsen's astute sequencing of the music. There are individual highlights like the cinematic rocker "Streets," the ambient folk of "Will You Remember Me?" and the even more atmospheric instrumental "Shadow." But most importantly, Look What You Made Us Do is an album that works better as a whole, where the sum does, indeed, transcend the individual parts. It's a strong step forward for Larsen and Lama, and one that will hopefully bring the group greater visibility.

Beginning; Wakeup Call; The You'll See; Streets; Now Will You Remember Me?; Shadow; Came Through Stone to Get Here; Tell Me; Fighting; Visions of Trains; Ending.

Title: Look What You Made Us Do | Year Released: 2009 | Record Label: Spoon Train Audio