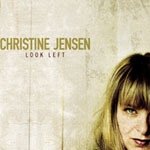 While Christine Jensen remains one of Canada's best kept secrets, she has garnered some international attention since emerging on the scene in the mid-1990s. Three of her compositions were featured on the highly regarded Vernal Fields (Enja, 1994), by her sister, trumpeter Ingrid Jensen, and she's had works for big band recorded and performed the world over. Still, outside Canada she remains a relatively unknown quantity in the grander scheme of things, something that Look Left deserves to rectify.

Jensen works in the "new mainstream arena also occupied by groups like the SFJazz Collective. Her music is undeniably straightforward, and the writing is slanted towards providing ample room for her piano/guitar/bass/drums quintet to explore. But Jensen's music also incorporates shifting meters and just the slightest hint of an outré edge to make this highly accessible set an exciting one that relies as much on the collective strength of the players as Jensen's substantive writing.

The majority of Look Left was composed in Paris, where Jensen lived and studied for six months courtesy of an Artist Studio grant, though it's rarely reflected in the music. The opening track, "Upper Fargo, references the Midwestern sounds of Pat Metheny and Dewey Redman, but its strong groove, courtesy of bassist Fraser Hollins and drummer Greg Ritchie, also has an assertive Latin edge that's made crystal clear during pianist Dave Restivo's vividly constructed solo.

Jensen's writing is innately lyrical. Her strong themes often provide grist for vamp-based solo sections that demonstrate just how well-oiled this quintet is. The relaxed groove of "Cedar refers to the Vancouver Island town she grew up in, but could just as easily be an homage to pianist Cedar Walton. While she never gets raucous, Jensen's alto solo creates an energy mirrored by Ritchie's intuitive response. Restivo delivers another strong solo that places Herbie Hancock-esque modernity within easy-on-the-ears thematic development. Guitarist Ken Bibace's warm-toned delivery mixes Jim Hall's clarity and economy with occasional bursts that never seem out of place.

Jensen's soprano playing rivals her capabilities as an altoist and composer, making her a triple threat. "Capers Papers is a complex yet approachable tune that shifts feels from a 9/4 modal vamp to a swinging 6/8 theme. Jensen's at her best here, building a solo from the ground floor up, gradually increasing in power and fluidity.

Jensen's harmonic and rhythmic approach is unequivocally contemporary, but she's patently rooted in a conventional jazz aesthetic. Look Left is a compelling set that will appeal to traditionally minded listeners, but has enough fire and angularity to appeal to those whose tastes run farther afield.