BY EYAL HAREUVENI
March 7, 2014
Sign in to view read count 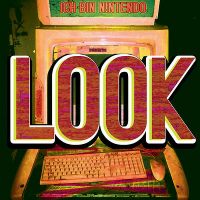 A year has passed since Norwegian punk-jazz trio Ich Bin N!ntendo released its debut release with Swedish sax titan Mats Gustafsson and fortunately little has changed in its uncompromising, raw approach. The worries that the Nintendo corporation might sue the trio evaporated and its members gathered experience in less tougher and noisier outfits—guitarist Christian Skår Winther as a solo improviser; him and electric bassist Magnus Nergaard in the experimental-art rock outfit Karokh and the improvising trio Monkey Plot; and drummer Joakim Heibø Johansen in the like-minded trio MoE. Plans to record the sophomore album in a proper studio were abandoned at the last minute when the trio moved to its old rehearsal room, a 2x4 meter floor with low ceiling where Look was recorded.

The five pieces feature a nuclear sonic stew of noise, grindcore and punk random elements layered and dressed in urgent and reckless, improvised structures. All sounds are taken to the most extreme edges, distorted, trashed. Then the nervous trio begins to grind more new sounds, pushing the sonic envelope hard until it collapses magnificently (as on the noisy 13-minutes mayhem of "Endless Bovis"), mocking any attempt to conceptualize its art other than experiencing it—best in high, even higher, volume.

The other following shorter pieces feature the trio sketching a thick, almost static electric storm on "Cream Corn Wand," experimenting with burping voices on "Star City" before launching into another lengthy, feedback-laden noisy abyss, and even creating a loose, playful interplay on "Live and Let Live." Ich Bin N!ntendo finishes with the ecstatic eruption of "Let's Toast!," a fitting tribute to the departed founder of Va Fongool label, Eirik Tofte.

Obviously not for faint of heart, but the brave ones may enjoy this deep dive into the extreme depths of noisy, improvised sounds.