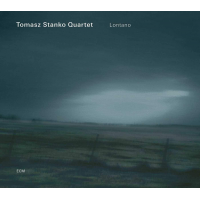 Other bands have been around for longer than Polish trumpeter Tomasz Stańko's current quartet, but few have exhibited such palpable growth in so little time. While Suspended Night (ECM, 2004) showed considerable development from the quartet's first release, Soul of Things (ECM, 2002), Lontano represents a major shift towards free playing that these albums only hinted at.

More than half of Lontano consists of three extended improvisations. These truly spontaneous compositions demonstrate the extent to which this quartet has evolved, revealing an ability to create form where originally there was none. In a recent interview, Stańko explained that his mentorship of three young players has been less about overt instruction or rehearsal than simply the act of playing together. But in the same way that athletes elevate their game by playing with someone better, working with Stańko has pushed pianist Marcin Wasilewski, bassist Slawomir Kurkiewicz and drummer Michal Miskiewicz to greater heights—and greater risks. So much so that on Lontano it's becoming difficult to tell who's the student and who's the teacher.

The freedom that infuses even the composed material might lead some to compare this quartet to Stańko's mid-1990s group with pianist Bobo Stenson, bassist Anders Jormin and drummer Tony Oxley. But other than the open approach they share, there's little else to reference. Wasilewski sometimes echoes the impressionistic classicism of Stenson, but he's equally informed by Herbie Hancock's more dramatic abstraction, notably during his solo on Krystof Komeda's "Kattorna." He's also asserting greater dominance than ever before. His ability to respond to his surroundings while pushing onward to new places has never been stronger.

Miskiewicz takes more chances than ever before, especially on the three improvisations. But unlike the organized chaos of Oxley, or even the more exaggerated punctuations of Jon Christensen, he's a gentler player. He's also not averse to settling into a defined pulse, as he does on "Kattorna" and the latter part of "Lontano, Part I." Kurkiewicz rarely speaks with a loud voice, but his presence is always felt, whether anchoring Stańko's poignant ballad "Sweet Thing" and the darker but more propulsive "Cyrhla," or acting as an understated conversationalist on the improvised pieces.

While Stańko's young rhythm section has perhaps made the greatest leap, the trumpeter has never sounded more vocal-like. On the rubato "Trista" his raspy tone seemingly cries out in anguish, while on "Lontano, Part II" he finishes one solo passage with a deep-throated growl.

Stańko's melancholy lyricism remains a pervasive element, but Lontano represents a more liberal approach to that innate quality. It's also proof of the value of mentorship. With Lontano, this quartet has finally achieved the classic status of recordings like Leosia (ECM, 1997) and Litania (ECM, 1997). While the other members of the quartet used to rely on Stańko's greater experience to help them advance, this is now unequivocally a group of equals.