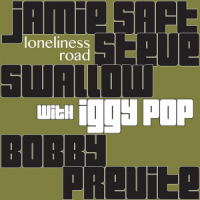 So, the front man for the rock/pop group called The Stooges gets an invite to pitch in with a classic jazz piano trio. The Stooge would be Iggy Pop; the piano trio, Jamie Saft's, with bassist Steve Swallow and drummer Bobby Previte. That's quite an experiment, like something Frank Zappa might have tried.

Pianist Jamie Saft has hitched a big part of his star to John Zorn, appearing, as a sideman or leader, on a score of Zorn's Tzadik label outings. That says "adventurous," and "no boundaries." But in his piano trio outings milieu, the avant-garde buttons aren't pushed all that hard. His The New Standard (Rare Noise Records, 2014), a fine outing, fits well within the mainstream. So does his second Rare Noise outing, Loneliness Road, a deep exploration, with an edge, of the Great American song forms, drawing inspiration from Bob Dylan, The Band, Alice Coltrane, Pharoah Sanders, Bill Evans. Those songbook forms rooted in folk music seem especially important here, with Dylan and The Band sharing that foundation. But Saft's concept seems less raw, more expansive, including the grandeur of Charles Ives and Aaron Copland, Stephen Foster, leaned in a pared down, modern mode.

The three distinctive musical approaches of the trio team coalesce to weave a beautiful and cohesive tapestry, whether it's the sunny opener, "Ten Nights," or the portentous, time-standing-stillness of "Bookmarking."

Then there's Iggy Pop, showcased on three tunes. This trio format—and this particular trio—suits him. The firm but pliable piano trio backing showcases Pop's speak/singing baritone dialogues. "Don't Lose Yourself" sounds like a baton handoff from Leonard Cohen for the leader of the elder statesman, poet/songster category. "Loneliness Road" is sounds like a brooding Van Morrison song. "Everyday" is a tender love song from someone who has experienced deep heartache. Iggy Pop—who'd have known—exudes gravitas.