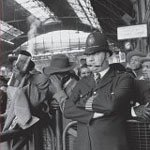 Honest Jons' exemplary archival collection of London-recorded Caribbean and African music from the '50s and '60s continues with this fourth, irresistible volume. After the third album's single-artist focus on the seminal Nigerian-expat bandleader Ambrose Adekoya Campbell, the series returns, for the moment anyway, to the broader spectrum of the first two volumes—taking in Trinidadian calypso, South African kwela, West African highlife, Latin music and jazz.

London Is The Place For Me chronicles an era when—soul and R&B aside—British black music was almost exclusively listened to by the country's small but growing African and Caribbean communities. The indigenous population's love affairs with ska and reggae were still way over the horizon, the arrival of world music even further down the line.

Few of the musicians featured on African Dreams & The Piccadilly High Life would go on to benefit from the wider marketplace created by later white enthusiasm for their music. One of the exceptions is the Nigerian percussionist Ginger Johnson, who bookends the album with two cha chas recorded in 1959. In 1969, Johnson famously accompanied the Rolling Stones at their free concert in London's Hyde Park. He went on to open the Iroko Club, a short-lived, counter-cultural beacon. He returned to Nigeria in 1975, on the cusp of sixty, but died within the month from a heart attack.

Johnson's two tracks find him leading a polished, horn-dominated lineup which, presumably, included colleagues from the Edmundo Ros Latin dance band (with whom Johnson had begun an association in 1949).

Big bands feature throughout the album, never more gloriously than on the four selections by calypsonian Lord Kitchener. "Is Trouble" (1953) is possibly the album's peak. Over a brassy, infectious arrangement, the lyric relates a story set against the Trinidadian carnival tradition of stick-fighting. Kitchener's swaggering delivery, lyric-writing genius and unrivalled sense of timing make the spirits soar. Other great calypsonians featured include Young Tiger, whose "Chicken & Rice" dispassionately recounts doing a runner from a Chinese restaurant in wrong-side-of-the-Notting Hill tracks Harrow Road.