Home » Jazz Articles » Various Artists: London Is The Place For Me 2

Various Artists: London Is The Place For Me 2 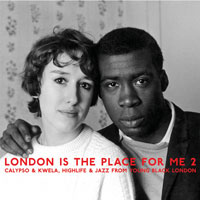 Vibrant and beautiful almost beyond words, the fifty year old recordings being collected on Honest Jons' London Is The Place For Me series are giant and precious treasures of early black British music. Exquisite artistic achievements in their own right, they also throw light on the early development of post bop jazz in the UK.

Volume one in the series, released in '02 and subtitled Trinidadian Calypso In London, 1950-1956, features all-but-forgotten masterpieces of reportage, social commentary and louche wit from Lord Kitchener, Lord Beginner, the Lion, and other recently arrived young calypsonians. This second volume, subtitled Calypso & Kwela, Highlife & Jazz From Young Black London, concentrates on the same period but widens the geo-stylistic net.

Jazz also gets lyric and stylistic look-ins on two early-mutant calypsos: Young Tiger's "Calypso Be" and King Timothy's "Gerrard Street." Tiger ridicules the "monstrosity" which is bop, but nonetheless includes a stirring bop-informed solo from Jamaican tenor saxophonist Sam Walker. Timothy instead celebrates the music, and London's modest then-answer to 52nd Street, Soho's Gerrard Street (but asks, "Another thing I don't realise/Why they all have dark glasses on their eyes?")

Straight-ahead calypso at its finest comes on Kitchener's "My Wife's Nightie"—where, unembarrassed by his own infidelity, the singer demands of a one-night stand that she "Come back with mi wife's nightie/Or I charge you for larceny"—and Lion's masquerade-spooky "Kalenda March," the latter catching a similar shiver-up-the-spine vibe as Beginner's awesome "Fed-A-Ray" on volume one.

Truth is, there are no standout tracks here. It's all wall to wall magic and beauty and loose-limbed dance rhythms. But Campbell's percussion only "Ashiko Rhythm," a mellow hand drums, thumb piano, and gong-gong workout on the basic shave-and-a-haircut/two-bits beat, and the Rhythm Brothers' delicate and lullaby-like closer "Sing The Blues," can't go by without mention.

Musical value aside, London Is The Place For Me 2 is also an acutely timely reminder of the glory that is London's multicultural mix—something we cannot allow to be destroyed by the psychopathic death cult behind this month's bomb outrages in the city. One love.