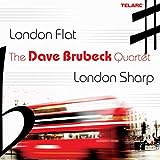 Straight and fast. That's how the Dave Brubeck Quartet grabs you with the opening title song of London Flat, London Sharp. Surrounded by a supporting cast of Bobby Militello, Michael Moore, and Randy Jones, the pianist is at the top of his game on this new outing. Clocking in at just under an hour, with ten tracks ranging from the three-and-a- half-minute ballad "Steps to Peace to the strutting, eight-minute "Mr. Fats, the album covers plenty of ground and takes no detours.

After the dazzling opener, the group settles into a laid-back swing on "To Sit and Dream. On both, Militello carries the main melody on alto sax while Brubeck stirs up some delightful piano solos, complemented by Jones on drums and Moore on double bass.

Brubeck, now 84, needs little introduction, having been a mainstay on the jazz scene for more than half a century. One of his early quartets struck gold in 1960. Their album, Time Out, and its singles, "Take Five and "Blue Rondo a la Turk, were the first in modern jazz to go gold.

While Brubeck is frontman, Militello is the star. He has appeared on some fifty-plus albums with a varied list of performers, including Charlie Shoemake, Chuck Mangione, Mark Colby, and the Manhattan Transfer's Cheryl Bentyne. In the 1970s, Militello spent five years with Maynard Ferguson's orchestra, playing baritone sax and serving up sensational flute solos on such show tune adaptations as "Maria (from 'West Side Story'), "Theme from Star Trek, and "Over the Rainbow, plus Eric Gale's "Swamp. Militello also has four solo albums, and he's recorded fourteen with Brubeck, including the new release.

Some of the songs were featured on Brubeck's 40th Anniversary Tour of the UK, including "London Flat, London Sharp, so named because during part of that tour, the group stayed in London apartments (flats), which Brubeck said was sharp after previously complaining about their accommodations. "Steps to Peace, the only song on the new album to feature Militello on flute, was penned by Derrill Bodley on September 11, 2001. His daughter, Deora, was a passenger on Flight 93, which was hijacked and later crashed into rural Pennsylvania. The song, written later that day, was dedicated to Deora, the other passengers who died and The Sharing of a Just Peace, an organization Bodley has worked with in recent years. All other tracks are Brubeck originals, including such standouts as "Forty Days, which depict Jesus' period of solitude in the desert, and "The Time of Our Madness. "Yes, We All Have Our Cross to Bear is one of the few spots where bassist Moore gets to stretch out.

Jones and Moore provide the backdrop for Brubeck and Militello's leads and improvisations. Though Jones doesn't have any extended solos, his presence is felt on all but "Ballad of the Rhine, a Brubeck solo. With upbeat grooves and eloquent ballads, London Flat, London Sharp is straight jazz with no gimmicks.

London Flat, London Sharp; To Sit and Dream; The Time of Our Madness; Unisphere; Steps to Peace; Forty Days; Cassandra; Yes, We All Have Our Cross to Bear; Mr. Fats; Ballad of the Rhine