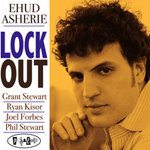 Bebop is almost seen now as the default form of jazz. Back in the day though, most jazz musicians still swung and swayed like Sammy Kaye, so the "new sound Dizzy Gillespie and his cohorts invented was as jarring as anything coming out of today's New York jazz underground. With Lockout, pianist Ehud Asherie takes that uptown sound and runs with it, spurred on by a monster quartet that features two major players at Smalls, the downtown club where Asherie cooked up his chops.

Four of the nine cuts on Lockout are Asherie originals, though they are almost indistinguishable from the bebop standards with which they share space here. "Mixed Emotions shoots out of the gate with Asherie and tenor saxophonist Grant Stewart flying in tight formation, each shaping the head while injecting enough harmony to create their own individual spaces. Stewart's phrases are sharp and clipped as he plumbs the depths of his tenor sax, while Asherie comps like a fiend behind him. The Israeli-born pianist takes the spotlight with a quick right hand that dances and bangs, snapping off a fast "Yellow Rose of Texas sub-reference in the middle of a blinding solo. That snap never wanes, not even on the Irving Berlin ballad "Isn't This a Lovely Day or during his in-the-clear intro to Harry Warren's "I Had the Craziest Dream.

Asherie's music has the same feel as the picture on the back of the CD booklet: New York at night, all neon and shadows and glowing mist, as urban as it gets. "Chonky is a rolling blues that reeks of "Noo Yawk," and has Stewart' smoking tenor in the Coleman Hawkins tradition; "The Special walks those same mean streets, with slightly flat lines that hint of impending danger. The title track could have come straight out of the bells of Dizzy and Bird, with Asherie playing Bud Powell chords to complete the illusion.

Drummer Phil Stewart hooks up with bassist Joel Forbes to provide the classic bebop bass and drum foundation. Both players get room to stretch here and there—Stewart most notably on Powell's "Un Poco Loco —but their primary mission is to lay the floor for the three players who do the bulk of the heavy lifting. The third soloist is Ryan Kisor, whose searing trumpet appears on four cuts, including the Gillespie composition "Shaw 'Nuff. Kisor and Stewart's solos are stunningly chaotic—crazed buglers calling the charge as the track careens downhill, almost at the edge of the cliff.

Asherie is firmly in control though, and shows wisdom beyond his years by giving his players the space they deserve. Asherie doesn't always take the first solo, but he doesn't have to: Lockout is clearly his vision, and it injects verve and electricity into a sub-genre that began as innovation, but nowadays can lend itself to stagnation.