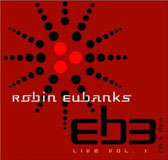 While ongoing developments in the area of technology have made it possible for artists to create a big band sound on a small band budget, you'd be hard pressed to find a group integrating it as seamlessly and interactively as trombonist Robin Eubanks' EB3 on Live Vol. 1. Thankfully Eubanks, rather than leaving listeners scratching their heads wondering who is doing what, has included a DVD that lets you watch five of the CD's nine performances. After seeing the footage, however, you may know who is doing what; but you may well still be wondering just how they're doing it.

This is especially true in the case of drummer Kenwood Dennard, who fills out the fledgling trio alongside keyboardist Orrin Evans. Dennard's illustrious history playing with everyone from Pat Martino to Jaco Pastorius means he's a serious drum threat, but it's difficult to conceptualize his playing keyboard bass with one hand while working over the kit with his remaining limbs. His ability to create complex, irregularly metered grooves literally single-handedly would put most two-handed drummers to shame. But on the funky "Mojo Jojo," where he continues to accompany himself on keyboard bass throughout most of his own solo? Unbelievable, if one weren't able to trust one's own eyes.

Eubanks' skill at embracing the jazz tradition while concurrently looking ahead has been especially honed in his longstanding relationship with bassist Dave Holland. His assimilation of styles on the complex yet organically flowing "Indo," where time organically alternates between soft back-beat and defined swing, is just part of an all-embracing aesthetic that incorporates other stylistic components, including M-Base funk and rock, into a unique vocabulary.

Eubanks has been using technology to expand his instrument's palette for over fifteen years, so it's only natural that he should surround himself with like-minded spirits. He's so comfortable with it that he can create remarkable solo pieces like "Me, Myself & I" and "Solo Latin." In both cases looping to create harmonized layers of trombone, and percussion pads that are also sampled then looped, create a foundation over which he can solo with the remarkable virtuosity and articulation that's put him at the bleeding edge of his instrument. The technology, however, is still only a means to a very musical end.

Eubanks also puts his electric trombone to great use on "Blues for Jimi Hendrix," where distortion, flanging, delay and other processing emulate the late guitar innovator. When you've got a slide, who needs a whammy bar?

Still, EB3 wouldn't impress if it weren't an intimately interactive trio. Rather than creating restrictions, the technology affords everyone surprising freedom. Evans, the youngster of the bunch, is adept at playing tag team with Dennard for bass duties, yet is at the same time an equally energetic and inventive soloist. With Live Vol. 1's obvious implication, one can only hope the second installment won't be far behind, because this is an exciting new trio that's worth keeping a close eye on.