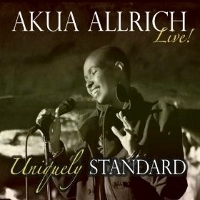 The jazz vocals standard repertoire has a quantum mechanics of its own. Artists seem attracted to certain dense loci within the repertoire and orbit there. Then there are some artists that do this while accumulating other pieces outside of this loci to make their own. This is what Washington, DC native Akua Allrich does and displays on Live!: Uniquely Standard. Allrich's set list, from two performances in DC between February and April 2012, reveals a special reverence for incomparable singers Nina Simone and Miriam Makeba, for whom Allrich has developed tribute programs. But this young and exciting artist takes things well beyond this realm of singing, to encompass much more.

While the very organic "Don't Let Me Be Misunderstood," driving "Sinnerman" and Africa-humid "Afro Blue" provide the solid foundation of this set assembled from shows at Washington DC's Bohemian Caverns and THEARC Theater, it is Allich's reaching survey of just about everything else that is so provocative. Allrich opens the disc with the Donaldson/Kahn 1928 composition "My Baby Just Cares for Me," which became a signature song for Simone some 30 years later. Allrich retains a good bit of the pre-Depression era flavor of the song without sacrificing the power infused by Simone.

Billy Strayhorn's "Lush Life" is beautifully elegant and a sharp Juxtaposition to the carnal "Afro Blue." The contrast is as dizzying as it is brilliant. Allrich has the chops to sing whatever she wants, and further proves it on a bonfire "Black Coffee." Her instrumental support never interferes with the singer, providing a fecund soil in which to plant her vocal garden. Taken as a whole, this live recital is a very good jumping off point for those interested in modern jazz vocals and fans of the great Nina Simone. Allrich is a vocalist to watch. She may very well be the next big thing.

My Baby Just Cares for Me; Don't Let Me Be Misunderstood; I Wish You Love; Lush Life; Jol'Inkomo; Afro Blue; Wishful Thinking; Black Coffee;Sinnerman; (I'm Afraid) the Masquerade Is Over; (Outro) Fire/Seeline Woman.