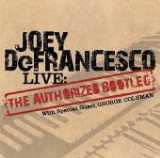 Organist Joey DeFrancesco deserves credit for showcasing some comparatively neglected voices on the music scene, like tenor saxophonist Houston Person and clarinetist Mort Weiss. George Coleman, the featured guest on this outing, came up playing alto (Lee Morgan, City Lights, Blue Note 1957), though he would soon shift exclusively to tenor while retaining much of the smaller horn's high-register emphasis. A recently-issued 1963 Miles Davis concert with Coleman (Live at Monterey, Concord 2007) is so spellbinding it might lead to questions about Davis' judgment in replacing him with Wayne Shorter. Shorter chose abstract musical paths and, later, fusion, while Coleman remained close to the beleaguered center, continuing to fan the flames of hard bop in NYC Village quintets with frontline partner Danny Moore (whatever happened to this gifted trumpeter?) and New York power pianist Harold Mabern.

Always an imposing physical specimen, Coleman appears to have kept himself in shape musically as well. His favoring of the treble register of the horn is in evidence throughout, though of late he's introduced a degree of overcompensating support to his tones, which once bore a striking resemblance to the effortless altissimo of John Coltrane. Still, one could argue that the extra rawness makes him a better complement to the explosive rhetoric of DeFrancesco's B3. Whereas formerly the beauty of Coleman's playing frequently lay, like Davis' minimalism, in what was implied, his playing on this date, as DeFrancesco acknowledges during the program, is that of a man who "means business." The tones are frequently impassioned cries, the altissimos played not merely to the back row at Yoshi's but entering a sonic field ringing of quantum mechanical physics as much as tough-tenor testifying.

The program opens with a fearlessly flying "Cherokee" and adheres throughout to a mainstream melodic/harmonic line. Rather than attempt to run the changes and keep up with the rapid-fire articulations that a bop-minded player, or younger Coleman, might find hard to resist, the mature player opportunistically chooses his spots, frequently finding his way to the outer spatial regions of his horn's reach, occasionally adding an extra wallop to his phrases with a "phase-shifting," alternate-fingered climactic top tone. The approach is arguably problematic on Lee Morgan's artfully-constructed "Ceora," which simply refuses to cooperate with excessive tampering let alone bullying. Attempts to overpower its intricate melody or disturb its delicate harmonies can easily come off as unnecessary roughness. Also, recalling the inspired musical marriages of vocalists and tenor giants (Billie Holiday and Lester Young, Etta Jones and either Houston Person or Gene Ammons), where is Coleman during Colleen McNabb's time on the bandstand?

These quibbles aside, the combative veteran stands up to both the heavy-duty machine invented by Mr. Hammond and the indomitable playing by its present-day master as though the outcome were a foregone conclusion: as anyone should know, the man who "means business" seems to be saying, if you plan on having a musical street fight, and one of the pair is brandishing a Hammond B3, never bet against the guy with a Selmer Mark VI.