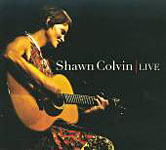 In these days of Pro Tools, punch-ins, and quantizing, it's a sad reality that many artists who sound great on record are incapable of pulling off live performances of equal quality; it's now possible to make a silk purse out of a sow's ear. Then there's singer/songwriter Shawn Colvin. Starting with the breakthrough hit Steady On (Columbia, 1989), her studio albums have all been beautifully crafted, thanks in no small part to the astute choices and sonic layering of longtime producer/multi-instrumentalist John Leventhal. While still lush to the ear, Colvin's first album for Nonesuch—2006's These Four Walls—was something of a return to the more stripped-down approach of her first record.

Still, the rubber really hits the road with Live, recorded over three nights at Yoshi's in Oakland, USA. Pared down to nothing but a voice and an acoustic guitar, it's clear that the same raw materials that encouraged Columbia to give her a contract back in the late-1980s remain intact. Colvin proves herself an engaging performer on this set of 12 originals and three covers, culled from five studio albums released over the past 20 years, connecting with her audience on a number of levels.

Colvin's pure voice and restrained delivery make every song a treat, from the folksy "Shotgun Down the Avalanche" and poignant "Polaroids" to the rhythm-heavy "Tennessee," and Grammy Award-winning "Sunny Came Home"—introduced, after the autobiographical "Nothing Like You," from Whole New You (Columbia, 2001), with, "After all that sensitive stuff, sometimes you've just gotta write a murder ballad." There's no American Idol-style melisma here; instead, a kind of comfortable, nuanced delivery that gets deep into every song. Colvin turns The Talking Heads' "This Must Be the Place (Naïve Melody)" into a soft ballad, and finds the buried meaning of Gnarls Barkley's neo-soul hit, "Crazy," in an insistently propulsive but ultimately darker take.

Colvin's equally fine skill as an acoustic guitarist—sometimes buried by Leventhal's undeniably fine production—is front and center. A strong, rhythmic player, there's a reason why she seems to prefer performing solo: unencumbered by the constraints of a group and more defined arrangements, she's simply able to exercise greater interpretive latitude.

Telling the audience "I'm going to do one more, but I don't know what to do," the obligatory cry for Leonard Skynyrd's "Free Bird!" comes from the audience. Responding, "Yeah, you had to say it didn't you? Here's the thing: 'Freebird' is really popular, but I was playing in bands at that time, and the truth of the matter is, [Deep Purple's] 'Smoke on the Water' was a much more popular song," Colvin launches into "Diamond in the Rough," a highlight from Steady On. It may not be "Smoke on the Water"—or "Freebird," for that matter—but it's a better choice and, as is the case with all of Live, a song that captures the imagination and the heart with nothing more than one fine voice and one equally fine guitar.

Polaroids; A Matter of Minutes; Shotgun Down the Avalanche; Twilight; Tennessee; Nothing Like You; Sunny Came Home; Fill Me Up; Wichita Skyline; I'm Gone; Ricochet In Time; Diamond in the Rough; Crazy; This Must Be the Place (Naïve Melody).