BY JAKOB BAEKGAARD
December 29, 2009
Sign in to view read count 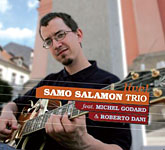 The music of Slovenian guitarist Samo Salamon encompasses a wide-ranging vision that leaves room for both subdued balladry and intense rock-outs. Still, even though there's certainly eclecticism at work in the musical poetics of this musician, who takes in influences as diverse as the gritty melodies of John Scofield and the reverb-drenched innovations of Bill Frisell, Salamon has achieved his own sound, one that combines a distinctively European folk feeling with the major streams of modern jazz guitar.

In spite of its deadpan title, Live! showcases Salamon at his most inventive, touching upon a broad palette of moods, sounds and tempi. Supporting him on the date are the immense talents of Italian drummer Roberto Dani and French tubaist/bassist Michel Godard.

Godard, in particular, proves to be a revelation with his unorthodox approach to the tuba, an instrument rarely heard in modern jazz. The sad sound of his brass adds color and mood to the rainy street meditation of "Hebe," paradoxically developing into a joyful anthem where Salamon spins melodic licks over Godard and Dani's bouncing rhythms. Elsewhere, the beautiful "Fall Memories" finds Godard exploring the texture of his instrument, with brassy breathing sounds and whispers reminiscent of trumpeter Herb Robertson.

Part of the album's dynamic is due to Godard's shift between the bass and tuba, with about half of the album's ten tracks dedicated to each instrument. While the tuba tracks tend to be freer and more meditative, the bass tracks provide a decidedly more rockish feeling that allows Salamon to flex his technical muscles, as on the elastic groove of "Happy Girl," which features lightning fast arpeggios.

Samo Salamon has recorded live successfully before, on Ela's Dream (Splasch, 2005) and Kei's Secret (Splasch, 2006). Live! is another worthy addition to a significant body of work, one that can only enhance Salamon's reputation as a distinctive composer and original guitar stylist.